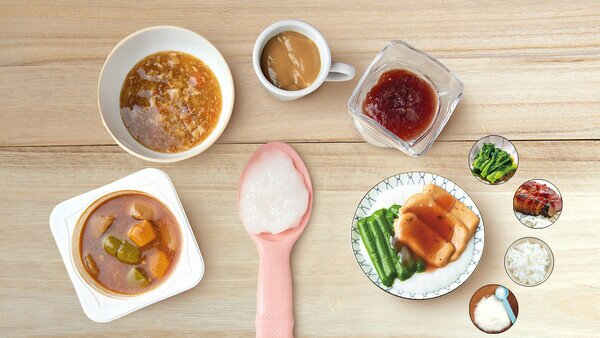 The general perception of a happy old age is to be well-housed, well-clothed and well-fed. Nevertheless, some senior citizens suffer from dysphagia due to diseases such as stroke, head and neck cancers, Parkinson's disease, and cognitive impairment making it easy for the food to enter the trachea by mistake when eating. To avoid choking, senior citizens might become picky, limiting their variety of food choices, as well as reducing their portion size and frequency of eating, resulting in weight loss, dehydration, malnutrition, and other health problems. In order to cater for the dietary needs of dysphagia patients and to help them regain their appetite, caregivers can purchase pre-packaged or prepare special meals using thickeners or other texture-modifying agents. This kind of special meal is collectively known as “care food”, which includes pureed foods widely known as “soft meals”. However, the Consumer Council found that some pre-packaged care food sold in Hong Kong were not universally categorised in accordance with the 8 levels of the International Dysphagia Diet Standardisation Initiative (IDDSI) Framework, whereas some only indicated the categorisation levels used in the country of origin, or were broadlycategorised as minced or pureed meals according to the form of the food. As consumers may find it difficult to distinguish whether the food is appropriate for patients, manufacturers are advised to improve the disclosure promptly. In addition, the Council reminds consumers when choosing the type of thickeners, they should seek advice from speech therapists instead of buying on price alone, in order to make appropriate care food for patients.

Pre-packaged Care Food Not Categorised According to International Standards

With an ageing population, the number of people with varying degrees of swallowing disorders in Hong Kong continues to rise. Consumption of inappropriate foods may increase the risk of such foods or drinks entering the respiratory tract, which could result in choking or aspiration pneumonia. In severe cases, it could even lead to respiratory failure and death. In the past, the thickness of care food lacked a universal standard. Such foods were simply categorised as minced or pureed meals, and slightly, mildly, moderately, and extremely thick drinks. In 2017, the IDDSI published an internationally standardised 8-level framework to provide definitions for food textures and drink thickness, ranging from level 0 “Thin”, which describes drinks that flow like water; to level 7, which describes regular daily food. Caregivers may refer to the simple IDDSI Testing Methods to distinguish the levels of foods and drinks, and determine whether it is appropriate for patients to consume. The Speech Therapy Department of the Hospital Authority has also adopted the IDDSI Framework since Q3 2021 and has taught caregivers to provide patients with food of appropriate texture according to the guidelines, so as to improve their health.

Nevertheless, in response to demand in recent years, a diverse range of care food has emerged on the market, such as ready-to-eat desserts and pre-thickened drinks, as well as pre-packaged thickened main dishes that only require reheating before eating. Some service providers even provide meal ordering or catering services to ease the burden of caregivers. However, the Council is concerned that some of the labellings of these pre-packaged care food products do not comply with the IDDSI Framework, as some imported brands have only been labelled with the care food categorisation standard used in their country of origin. For example, products imported from Japan were labelled with the Universal Design Food (UDF) standard of the Japan Care Food Conference which comprises a 4-stage categorisation, which may not directly correspond to the IDDSI Framework. Consumers are recommended to seek professional advice from a speech therapist before purchasing pre-packaged care food and to read and compare nutrition labels and ingredients, since ensuring an adequate nutrition intake for patients should take priority over the appearance of the food.

Apart from the price and usage amount, consumers should also be aware that modified starch-based thickeners are carbohydrates. If diabetics consume a large volume of drinks containing such thickeners in one sitting, their blood sugar levels may become unstable. Therefore, it is recommended to consume across several servings. Although many thickeners on the market have adopted the IDDSI Framework for their recommended usage amount, foods of different types and temperatures may show disparate thickening effects upon mixing with thickeners from different brands. As such, when preparing a certain type of food for the first time and trying out a new brand, it is recommended to use the IDDSI Testing Methods to determine whether the food meets the relevant requirements.

When preparing level 4 (pureed) to level 5 (minced and moist) care food, besides blending the food into a pureed form and adding the appropriate amount of thickeners according to the actual situation, caregivers may also choose to use food gellant to “gelatinise” the puree to make the soft meals more appealing. As for the preparation of level 6 (soft and bite-sized) to level 7 (regular/easy to chew) care food, hard ingredients such as meat, fish, shellfish and root vegetables can be softened by pre-soaking with softener before marinating and cooking. The Council stresses that regardless of the level of care food that is being prepared, the thickness of the food should be assessed based on the relevant IDDSI Testing Methods, using syringes, forks, or spoons, to ensure the safety of the patient. When preparing food of any texture and thickness, attention should be paid to balancing nutrition, serving size, and food versatility. As adjusting the thickness of food will change its nutrient content, caregivers can consult dietitians on the appropriate amount of ingredients and preparation methods.

The Council reminds consumers and their family members to be aware of any frequent coughing or choking during eating, whether they require swallowing for several times before completely ingesting the food, resistance to certain food textures, or food sticking to the throat or oesophagus, as well as consistent weight loss, as these may all be symptoms of dysphagia. The care food required by each patient may vary and could also change according to fluctuations in the dysphagia condition. Therefore, a speech therapist should first be consulted to evaluate and arrange a suitable treatment plan and special diet. Dietitians also recommend that patients may aim to eat smaller and more frequent meals based on their needs and eating pace. It is advised to break down the daily consumption into several small meals to avoid stress and help maintain physical and mental health.