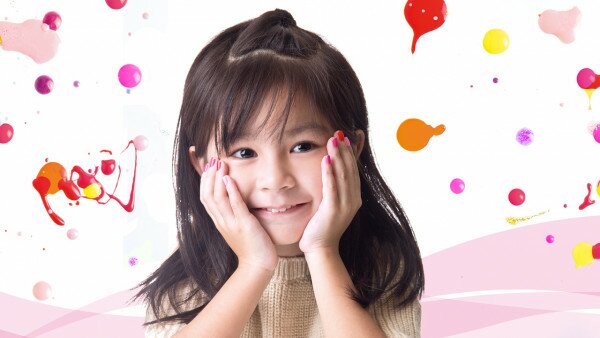 The quest for beauty is not limited to adults as many parents allow their little girls to put on nail polishes.  Many children's nail polishes available on the market claiming to be non-toxic or specifically for kids are making parents believe they are safe.  A test on children's nail polishes conducted by the Consumer Council, however, discovered that 3 models contained a cancer-causing substance, benzene.  The Council calls on manufacturers immediately to stop using benzene-containing ingredient or material.  The test also found that plasticiser DBP, prohibited in cosmetics, was detected in 1 model while preservatives MIT and CMIT, which can cause skin allergy, were found in 5 models.  Content of such preservatives was found to be slightly exceeding the relevant limits specified by the Mainland's standard in 3 of the 5 models.  The Council advises parents to choose carefully and to read ingredient lists under scrutiny.  Do not take nail polishes lightly as just for fun.

Among the 13 nail polish models consisting of 22 colour samples covered in the Council's test, 8 were individually packed and 5 in sets consisting of 1-5 colours.

Benzene, known to be human carcinogenic, is prohibited for use as ingredient in the production of cosmetics in the Mainland and the European Union (EU).  Test results showed that benzene was detected in 3 nail polish models, consisting of 4 samples in total, of which 2 set models having trace amount (less than 5ppm), and 2 colour samples from a set model containing concentrations of 8 and 12ppm respectively.

Benzene is volatile and exposure could be occurred through inhalation, and its vapour may cause irritation to one's skin, eyes and respiratory tract.  The World Health Organisation has indicated that exposure to benzene has been associated with a number of acute diseases and long-term health effects such as cancer and aplastic anaemia.  The Council calls on respective manufacturers to immediately stop using benzene-containing ingredient or material.

Tests were also conducted on each model to trace presence of 8 types of phthalate plasticisers which are banned for use in cosmetics.  The result showed that 2 colour samples of 1 model were found to contain dibutyl phthalate (DBP), with content reaching 1,400 and 1,500ppm respectively, much higher than the trace amount set by the Scientific Committee on Consumer Safety at below 100ppm, which amount would be unlikely to cause any risks.

The potential hazards of DBP include endocrine-disruptive effects and reproductive toxicity which might also affect immune and nervous system.  The Council advises consumers to stop using products detected to contain DBP immediately.

Furthermore, the test discovered that 1 model was found to contain allergy-causing preservatives MIT (methylisothiazolinone) and CMIT (methylchloroisothiazolinone) with the total content of 0.00179%, marginally exceeding the limit of 0.0015% under the Mainland's standard.  MIT was detected in 3 other individually packed models as well as 2 samples of 1 set model, with concentrations ranging between 0.00065 and 0.014%.  The detected amounts in the 2 colour samples of 1 set model slightly exceeded the limit of 0.01% allowed in the Mainland and EU.

Among the 5 models containing MIT and CMIT, only 2 disclosed that the products contained MIT on the ingredient lists.  Consumers may not be able to realise the potential risks that children could suffer from allergic reactions after use.  Dermatologist reminds that allergic reactions may not only be contained around fingers and hands, but also other parts of the body including face, neck, lips and eyelids reachable by hands.

The test also detected methanol in 9 models of 11 colour samples at an amount ranged between 27 and 580ppm, which is much lower than the upper limit set out in the Mainland's standard at 2,000ppm.  Methanol may cause irritations to children's eye, nose and respiratory tract, therefore it is advisable to apply nail polish in a well-ventilated environment and keep it away from open flame.

In terms of testing on heavy metal contents, 11 of the 13 models were found to contain trace amounts of heavy metals, included lead, arsenic and cadmium.  Even though the contents are in compliance with the relevant Mainland standard, if children are prone to put their fingers in their mouths, they are at risk of absorbing these heavy metal contents from the nail polish chips.

On the other hand, it was found that only 3 among the 13 models had bilingual product instructions while the remaining 10 had English instructions only.  6 out of all models from the study offered directions for using the products, and at the same time on how to remove them after being applied.  The Council is of the view that manufacturers need to improve labelling information, to help consumers learn about the proper way of using and removing children's nail polishes.

Children's nail polishes may generally be less durable and may chip off easily.  It may increase the risks of swallowing the chips or scraps from nail polish unintentionally for children; water-based nail polishes in general also need a longer time to dry, increasing the chances of nail polish contacting with skin and eyes in the meantime.

Parents are advised to beware the following when using nail polishes on children: