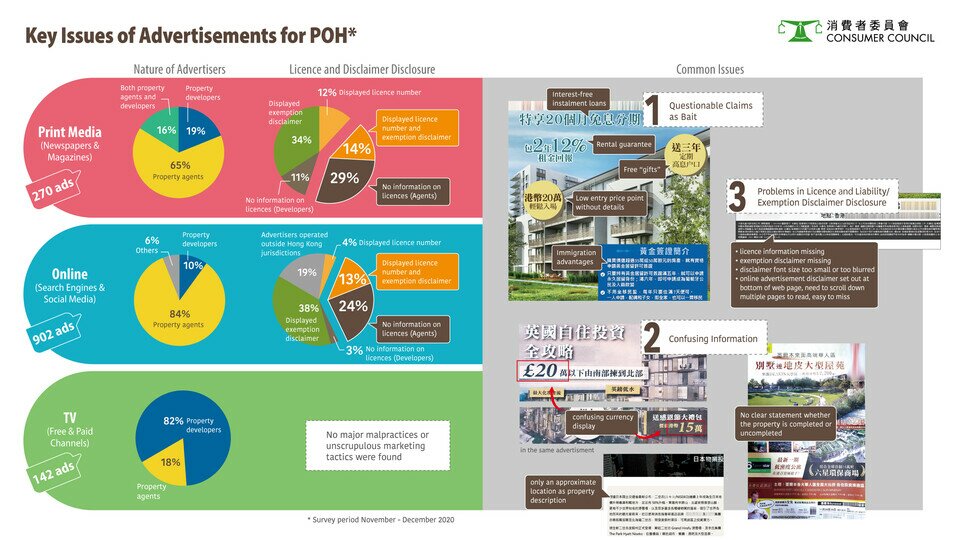 Consumers’ demand for properties situated outside Hong Kong (“POH”) has seen a steady climb in the past 30 years. However, purchasing POH often entails high stakes involving millions of dollars, higher risks and uncertain factors. With a view to safeguarding consumer rights, the Consumer Council conducted a study through a comprehensive research methodology, including analysis into 261 complaint cases, advertisements survey on 1,314 advertisements collected, mystery visits to 36 projects, in-depth interviews with relevant authorities and stakeholders and benchmarking regulatory regimes in 7 other jurisdictions. The findings were compiled in the “Purchase of Properties Outside Hong Kong – A Study on Enhancing Consumer Protection” report.

A survey of the advertisements relating to the marketing of POH was conducted in order to find out what marketing and advertising practices were being used by both licensed and unlicensed agents. The survey covered advertisements placed by developers, agents or salespersons in 3 different channels and mediums, namely, print media, online platform as well as TV. It was concluded that POH advertisements had insufficient regulation with the findings as follows: