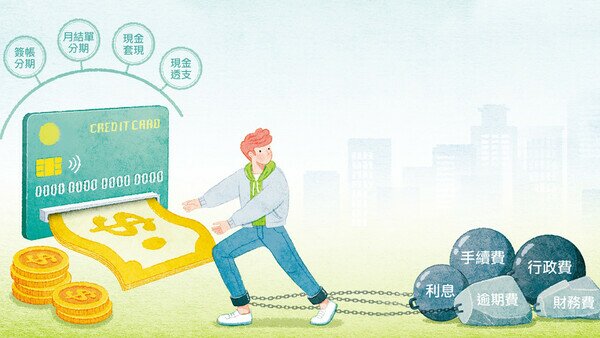 With a credit card on hand, users can shop conveniently and enjoy different merchant offers, and some may even use it for emergency cash flow. However, a survey conducted by the Consumer Council found that the annualised percentage rates (APR) of instalment plans, and cash advances provided by different credit card issuers varied vastly. Among the plans, the finance charge APR for cash advance was generally higher, from 5.9% to the highest of 47.97%. The Council reminds consumers that apart from interest, the costs of a loan could include handling fees and administrative fees related to the loan as well as charges on late payment or early settlement. Even if some plans were advertised to be "interest-free" or "no handling fees", different conditions/restrictions might apply, such as a minimum spending amount and fewer options for repayment periods.

The Council stresses that while borrowing from credit cards may seem convenient, significant interests might be involved. As such, consumers should not be too hasty in spending, cashing out or taking cash advances for the sake of convenience or solely being lured by claims such as "interest-free, no handling fees". If an instalment is not repaid on time, consumers might consequently bear a large sum of interest and late charges, resulting in debts snowballing due to piling up principal and interest.

In the survey, 21 card issuers were inquired on credit card loan services. Except for 2 card issuers who did not reply, information of a total of 69 loan plans was collected, including 30 merchant instalment/purchase instalment/ statement instalment plans, 19 cash instalment plans and 20 cash advances, in order to compare the terms and conditions of various loan services, including APR, loan limit, interest, handling fee, administrative fee, as well as the cost for early or overdue repayment, etc.

A merchant instalment plan refers to an instalment arrangement by the merchant to the card issuer when a cardholder makes a purchase that meets specific transaction conditions (such as using a designated credit card, reaching the minimum transaction limit, etc.). In the 7 merchant instalment plans, 1 charged a monthly handling fee of 0.3% and a one-off application handling fee of $100 for plans with longer repayment periods (18 and 24 months); while the remaining 6 were interest-free and free of handling fee.

Moreover, 9 purchase instalment or cash instalment plans charged interest and/or handling fee based on the amount, with 6 plans charged lower interest and/or handling fee for higher loan amounts. Taking one of the card issuers as an example, the minimum monthly handling fees for cashing out less than $150,000, $150,000 to $300,000, and more than $300,000 were 0.23%, 0.15% and 0.13% respectively. Although the bigger the sum of loan, the lower the handling fee, the interest amount to be paid is much greater. As such, if consumers intend to take credit card loans, they must think twice before doing so.

Interest-free Period Bound by Terms and Conditions, May Not be Applicable to Cash Advances

Be Mindful of the Instalment Limit and the Repayment Period

If the cardholder failed to repay the minimum payment on or before the payment due date stated in the monthly statement, other than the finance charge, a late charge would also be imposed. The APR of late charge for purchase/statement instalment plans was between 10.21% and 44.25%. Card issuers generally base their calculation on the minimum repayment amount and set the ceiling at $230 to $350. Only 2 plans did not impose a late charge.

If an early repayment was desired after taking a purchase/statement instalment or cash instalment from the credit card, plans mostly charged handling fees, with a fixed fee ranging from $150 to $500, while some plans would charge a certain percentage of the original loan amount or the handling fee for the remaining repayment period.

If cardholders opt for borrowing from credit cards, they should prudently consider their actual funding needs, relative costs for loans and their affordability. They should also take note of the following: