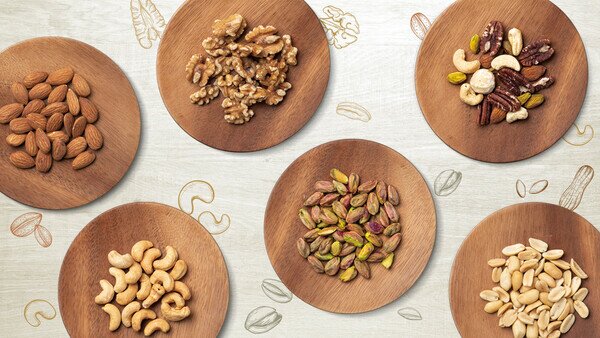 Peanuts and nuts have always been considered healthy snacks. When consumed right, they could help lower cholesterol levels, improve heart and gut health. The Consumer Council tested 33 models of peanut and nut products on the market and found over 95% (32 models) to be high-fat foods, though most of the fats were “good” fats which offered health benefits with appropriate intake. 5 models exceeded the Centre for Food Safety’s (CFS) reference benchmarks for “high-sugar” or “high-sodium” foods owing to added sugar and salt. The Council reminds consumers that the key to healthy snacking is to select peanuts and nuts without added oil, sugar or salt; control consumption portions; and be mindful of the fat content, so as to avoid excessive intake which could lead to various health risks such as obesity.

33 models of peanuts and nuts were tested, of which 32 were pre-packaged and priced from $9.9 to $188 per pack, including 5 almond, 6 cashew, 8 peanut, 4 pistachio, 4 walnut, and 5 mixed nut models; while the 1 remaining model of walnuts was sold loose. The price per 100g ranged from $5.0 (peanuts-in-shell) to $55.2 (shelled pistachio). Test items included food safety and nutrient content, while the accuracy of nutrition labelling was also inspected. The overall safety performance was satisfactory and none of the samples were detected with aflatoxins.

Peanuts and nuts are rich in healthy unsaturated fatty acids, which could help lower cholesterol levels in the body and are beneficial for heart health. However, excessive intake might lead to weight gain, which in turn could increase the risk of chronic diseases such as heart diseases, high blood pressure, etc. According to the test results for total fat content per 100g sample, aside from 1 model of crunchy peanuts, the remaining 32 models all reached “high-fat” levels (over 20g total fat content per 100g sample), with total fat contents ranging from 27.5g to 65.5g. By category, walnuts were the highest (excluding mixed nuts) with 62.2g per 100g, while peanuts were the lowest with 39.8g. An adult on a 2,000-calorie diet should have a daily total fat intake of not more than 66.7g. If they consume 30g (1 handful) of the walnut sample with the highest total fat content, it would incur a total fat intake of 19.7g; if they consume the whole packet of the said sample (100g), the total fat intake would be 65.5g, close to the maximum daily intake limit recommended by the World Health Organization (WHO).

Amongst the various types of unsaturated fatty acids, omega-3 fatty acids are essential fatty acids for the human body, but the detected levels vastly varied amongst the 33 models. The omega-3 fatty acid content per 100g sample ranged from 0mg to 9,220mg, representing a 183-time difference between the highest and the lowest ones (excluding the sample containing 0mg). A significant difference in detected amounts per 100g sample was also found amongst different categories (excluding mixed nuts), of which almonds was detected with the lowest average content (28mg), while that for walnuts was found to be the highest (7,258mg), around 258 times higher than almonds.

Some manufacturers add sugar or salt to make the product more tasty, but excessive intake of sodium could increase the risks of cardiovascular and kidney diseases, whereas excessive sugar intake could lead to unhealthy weight gain and obesity, and excessive free sugar intake could also cause dental caries. The test results showed that 3 peanut models with declared added salt in their ingredient list reached “high-sodium” levels (over 600mg sodium content per 100g solid food sample), with results ranging from 747mg to 895mg per 100g. Besides, 1 almond and 1 peanut sample which listed added sugar in their ingredient list were found to reach “high-sugar” food levels (over 15g sugar content per 100g solid food sample), detected with 17.8g and 20.1g sugars per 100g respectively. Based on the sample with the highest sodium content, consuming 1 portion (30g) would be equivalent to 13.4% of the daily maximum intake limit (2,000mg) for adults.

Peanuts and nuts are also rich in protein and dietary fibre. Protein helps promote growth, build and repair tissues in the human body, while dietary fibre lowers the chance of constipation and helps maintain gut health. The 33 models were detected with protein contents from 10.3g to 26.7g per 100g sample, most of which (32 models) reached the “high-protein” definition laid out in the Food and Drugs (Composition and Labelling) Regulations. Of all categories, peanuts were detected with the highest average protein content (20.5g). On the other hand, the dietary fibre content detected in the samples ranged from 3.6g to 12.0g per 100g, amongst which 28 models reached the “high-fibre” level, with almonds being the category with the highest average detected amount (10.1g).

Health-conscious consumers would reference the nutrition labels on the packaging to calculate the appropriate consumption portion. However, upon inspecting the samples’ nutrition labels, it was found that over 60% (21 models) had a discrepancy between the declared and detected nutrient contents that exceeded the tolerance limits set out in the Technical Guidance Notes on Nutrition Labelling and Nutrition Claims (“Technical Guidance Notes”). 2 models with declared sodium contents of 0.0mg and 0mg respectively were detected with sodium contents as high as 20mg and 22mg per 100g, which did not comply with the definition of “0” being not higher than 5mg as stipulated in the Technical Guidance Notes. 1 model was labelled with a sugar content of less than 1g per 30g sample, which was incompliant with the Technical Guidance Notes which state that amounts should be expressed as absolute numbers. While the relevant data was passed to the CFS for follow-up action, the Council urges manufacturers and suppliers to promptly review and rectify the information on the nutrition labels to ensure their accuracy.

The Consumer Council reminds consumers the key to a healthy diet is to select peanut and nut wisely, be mindful of controlling the serving portion, maintain a balanced diet, while paying heed to the following:

Store peanuts and nuts in an air-tight container in a cool dry place, and avoid storing for too long. Inappropriate storage may cause the nuts to be infested with mould and produce mycotoxins.