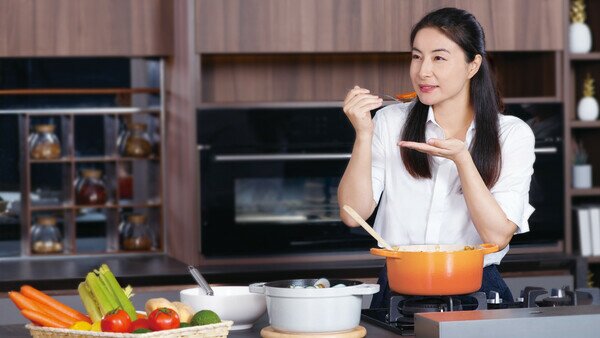 Cast iron cooking pots are a kitchenware favourite amongst avid home cooks due to their remarkable heat conductivity and heat retention, not to mention their stylish appearance. However, a test on cast iron cooking pots by the Consumer Council found that 4 out of the 7 tested models released different types and amounts of metals (cobalt, lithium, aluminium, arsenic, cadmium, iron, chromium, manganese, or vanadium respectively) that exceeded the international standard or the upper limit set by the Council of Europe (CoE), of which 1 model’s iron release amount exceeded the upper limit of the CoE’s guide by 54 times. Another model was even detected with the carcinogenic heavy metals arsenic and cadmium, of which the release amount of arsenic exceeded the upper limit of the international standard by 16 times. The test results have been referred to the Customs and Excise Department for follow-up action. The Council urges manufacturers to review the products’ raw materials and manufacturing process promptly and improve product quality, in order to safeguard the health of consumers.

The test also revealed considerable variance between the heat conduction speed and evenness of heat amongst the models. When heated using the same type of cooker, the models showed a nearly 3-time disparity in their heat conduction speed. In terms of evenness of heat, the interior bottom of 1 model had a maximum temperature difference of 191°C when heated on an electric ceramic hob, making it hard for users to control the cook of the food. During cooking, the temperature of the models’ handles ranged from 89.3°C to 97.3°C, all exceeding the upper limit (55°C) set by the European standard. When cooking with cast iron cooking pots, consumers should wear oven mitts or use pot holders to prevent scorching.

5 out of the 7 tested models had enamel coating while 2 did not. With prices ranging from $798 to $3,199, all models claimed to be suitable for gas hobs, induction cookers, and ovens. Test items included the release amounts and/or contents of metals, heat conduction speed, evenness of heat, heat retention performance, heat resistance, handle temperature, and evaluation of the durability of the enamel coating. The cooking performance and ease of use were also evaluated by panellists. The results revealed varying overall performance, with 3 enamel-coated models rated 4.5 points while the remaining models only received 2 to 3 points.

As metals could accumulate inside the human body, if metal migrates from cookware to food during cooking, it might result in excessive metal intake and pose health risks. Arsenic, cadmium and chromium (VI) compounds (a form of chromium) have been categorised by the International Agency for Research on Cancer (IARC) as “carcinogenic to humans” (Group 1), while cobalt is also categorised as “possibly carcinogenic to humans” (Group 2B). In addition, although lithium could be used as medication to treat bipolar disorder, excessive intake could cause mild diarrhoea, nausea, and hand tremors, etc., and may have the risk of impacting thyroid functions or abnormal foetal development.

Referencing the international standard ISO 4531 for testing the amounts of metals released from enamel-coated articles in contact with food, acidic food simulant (3% acetic acid) was placed in the 5 models with enamel coating and placed in a high-temperature environment of 95˚C for 2 hours. It was found that the amounts of metals released by 2 models exceeded the upper limit set by the international standard, of which 1 model’s amount of aluminium, arsenic, cadmium and lithium released exceeded the standard by around 0.4 times to 16 times, while another model’s cobalt and lithium release levels exceeded the limit by around 0.6 times and 1.3 times respectively.

Besides, the 2 models without enamel coating were tested with reference to the guide for the chemical safety of metallic food contact articles laid out by the CoE. Acidic food simulant (0.5% citric acid) was placed in the models which were then placed in a high-temperature environment of 100˚C for 2 hours. The results showed that 1 model’s chromium, iron, manganese and vanadium release amounts exceeded the CoE guide by around 0.7 times to 54 times, whereas another model’s amount of iron released exceeded the same guide by around 1.4 times.

For the test on heat conduction speed, the test models were heated on a gas hob, induction cooker and electric ceramic hob respectively, and the time required for the interior bottom to reach the temperature of 180˚C were measured. It was found that the heat conduction speed vastly varied amongst models. When heated on an electric ceramic hob, the models generally heated up faster but the discrepancy was greater, ranging from 1 minute 4 seconds to 3 minutes 58 seconds, an approximately 2.7-time difference. The speed of temperature rise was relatively closer when the models were heated on a gas hob, ranging from 3 minutes 4 seconds to 4 minutes 13 seconds, a difference of close to 0.4 times.

When calculating the time required to raise the temperature of 1 litre of water by 75˚C using the 3 different cooker types to simulate real-life usage, it was found that the performance amongst the models were similar. The model requiring the shortest time only took 6 minutes 26 seconds (using an electric ceramic hob), while the slowest one required 8 minutes 20 seconds (using an induction cooker). Upon comparing the heat-up speed on the 3 types of cookers, the models showed a variance ranging from around 9% (gas hob) to 17% (electric ceramic hob).

For home chefs who wish to achieve an ideal cook, the evenness of heat is of essence. However, the models’ performance varied considerably in this test item. When using the electric ceramic hob, the greatest temperature difference of the interior bottom ranged from 108°C to 191°C; that for induction cooker ranged from 61°C to 171°C; and for gas hob, it ranged from 66°C to 132°C. Nevertheless, all models showed good heat retention and received ratings from 4 points to 4.5 points in this category, meaning that they could help save energy while cooking.

If the handle temperature of cast iron cooking pots is too high during cooking, it may scorch the user. The test revealed that the handle temperature of all models (ranging from 89.3°C to 97.3°C) exceeded the upper limit (55°C) set by the European standard. Amongst this, the knob temperature of 4 models (ranging from 57.1°C to 75.7°C) was also higher than the European standard’s upper limit. However, 6 models still met the standard requirements as they included a reminder to use heat resistant gear (such as oven mitts) in their instruction manual.

The 5 models with enamel coating had satisfactory performance in both the impact test and thermal shock test. All models complied with the standard requirements of the impact test, amongst which the enamel coating of 4 models only showed signs of damage after enduring impact of 40N or 50N, while that of the best performing model was only damaged after 60N impact, receiving the highest rating of 5 points. In the thermal shock test, the models were heated to 200˚C then cooled with 20˚C water. The interior and exterior enamel coating on all test models showed no signs of damage even when tested at 300˚C, which was above the standard requirement (260˚C), proving all 5 models to be considerably durable.

Besides, in the fried egg performance test, the 2 models without enamel coating outperformed the 5 models with enamel coating. For those 2 models, the fried eggs either did not stick or only slightly stuck to the pot, thus were rated 5 points and 4.5 points respectively. Furthermore, panellists tasted and compared the flavour of bread baked with the test models and glass cookware on a blind-test basis. All panellists opined that there was no difference in the taste and aroma of the bread, as those baked with test models did not carry any “metallic” flavour or scent.

When using and maintaining cast iron cooking pots, consumers could pay heed to the following: