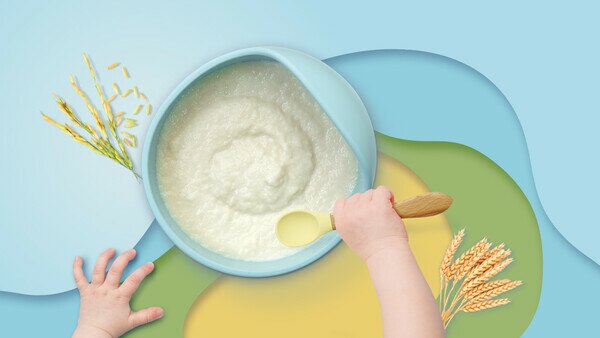 The safety of baby food is the top concern for parents. As their digestive system starts to develop, babies could gradually switch from a diet of breast milk or baby formula to solid foods when they are 6 months old, so as to diversify their nutrient intake. At this stage, baby cereals are a popular choice for many parents. The Consumer Council tested 17 models of cereal foods for infants and toddlers on the market. Trace amounts of the heavy metal cadmium were detected in over 80% of the samples, while traces of substances including inorganic arsenic, aflatoxin, and pesticide residues were detected in some samples. However, the levels of harmful substances in all samples fell below the upper safety limit set by many regions and the results were generally satisfactory.

Besides, in the nutrient content test, various samples were detected with iron and calcium contents higher than that declared on the product labelling, while some samples were found to have a content lower than the labelled value. Owing to the vast disparity in the retail prices ranging from $22 to $94.4 per 100g, besides safety, consumers might also consider the accuracy of nutrition information on the label and price when purchasing this type of product and select more cost-efficient foods for their baby.

The Council sourced 17 models of pre-packaged cereal foods for infants and toddlers from various retail points. Categorised by their labelled ingredients, the models included 10 rice cereals, 6 oatmeal cereals and 1 which included both rice and oatmeal. The samples were tested for the levels of heavy metals (cadmium, inorganic arsenic, lead and mercury), mycotoxins (aflatoxin B1, B2, G1 and G2), bacteria (Bacillus cereus, Listeria monocytogenes, and Salmonella), pesticide residues (glyphosate and 568 other types), and micronutrients (iron, calcium, vitamins A and D).

Over 80% Samples Detected with Cadmium but Within Safety Limits

In terms of heavy metals, the Council tested the samples for their levels of cadmium, inorganic arsenic, lead and mercury. The test took reference from relevant regulations or standards in the Mainland, European Union (EU) and the USA for heavy metal levels in cereal foods for infants and toddlers. The results revealed that all samples were not detected with lead and mercury, but 14 models were found with cadmium at concentrations of 0.0035ppm to 0.0230ppm. 1 model was found to contain 0.08mg/kg of the carcinogen inorganic arsenic, but the detected level was lower than the limit laid out by a number of regions.

2 Models Contained Aflatoxin B1 Not Exceeding the Limit

The samples were tested for the presence of 4 types of genotoxic and carcinogenic mycotoxins: aflatoxin B1, B2, G1 and G2. Aflatoxin B1, which is the most commonly found in food, was detected in 2 models at levels of 0.02 and 0.03 parts per billion (ppb, also known as μg/kg) respectively, which were lower than the maximum limit (0.1 ppb) for aflatoxin B1 as stipulated in Hong Kong’s “Harmful Substances in Food (Amendment) Regulation 2021” which will come into operation on 1 June 2023, as well as EU regulations.

Micronutrients are essential elements for the growth of infants and toddlers. Despite the fact that cereal foods may not be their sole source of micronutrients, all nutrient contents listed on the nutrition labels must be accurate. The samples were tested for their iron, calcium, vitamins A and D contents. Although 8 models did not declare their iron and calcium contents on the nutrition labels, iron and calcium were found in all samples. The detected iron content ranged from 0.37mg to 67mg per 100g sample, while the detected calcium content ranged from 8.6mg to 801mg per 100g sample. Amongst the models with declared iron and calcium contents, the iron content of 7 models and the calcium content of 8 models were higher than the declared value. 1 organic rice cereal model labelled as “Iron Fortified” was found to have an actual iron content 14.4% lower than claimed, which was not satisfactory; the calcium content of the same model was also 4.8% lower than its labelled value. Despite there currently being no regulation in Hong Kong that mandates products to display the iron and calcium contents, the Council believes there is still room for improvement by manufacturers concerned, to ensure consumers receive accurate information in selecting foods for infants and toddlers.

Organic Products Could Still be Contaminated by Pollutants in the Environment

Organic claims were found on 14 models. Consumers should be mindful that despite many cereal foods for infants and toddlers claim to be made from organic agricultural products without the use of chemical pesticides, there is still the chance of cross-contamination during the growth or manufacturing process, thus organic products might be detected with pesticides and other harmful substances. In the test for pesticide residues, 1 model which claimed to be organic was found with 0.034mg/kg of glyphosate, which was lower than the maximum residue limit of 30mg/kg laid out in Hong Kong regulations and the Codex Alimentarius. Owing to the low level detected, it is possible that the oatmeal product was contaminated by glyphosate in the environment. Glyphosate is listed as “probably carcinogenic to humans” by the International Agency for Research on Cancer (IARC), so its content in food was of great concern to the public. As IARC's evaluation was based mainly on human data obtained from occupational and environmental exposures, some other international, national and regional authorities have re-evaluated glyphosate from a food safety perspective. These organisations are of the unanimous view that glyphosate is unlikely to pose a carcinogenic risk to humans from exposure through diet.

Bacillus Cereus Found in Some Samples

All 17 test models were not found with the bacteria Listeria monocytogenes and Salmonella. However, 1 model was detected with Bacillus cereus at 2.0 x 102 CFU/g (i.e. 200), lower than the 103 CFU/g (i.e. 1,000) limit set by the Centre for Food Safety and still falling within the satisfactory range. Bacillus cereus is commonly found in natural environments and may cause vomiting or diarrhea.

It should be noted that although the safety performance of all models were generally satisfactory, the retail prices amongst the models showed a considerable disparity, ranging from $22 to almost $100 per 100g. Thus, consumers could consider their affordability and compare prices carefully, so as to select safe and cost-efficient cereal products for their babies.