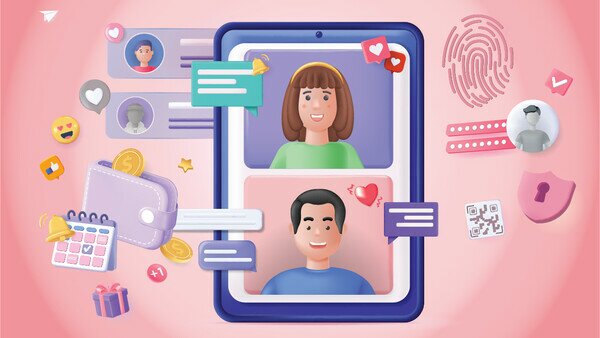 Despite the Bard’s edict, “The course of true love never did run smooth”, with the rapid advancement of the internet and smart devices, dating apps make expanding one’s social circle smoother sailing without leaving the comfort of home. However, as there exists a diverse range of dating apps in the market, each app offering varying options in terms of subscription plans, account opening, filter options, handling of users’ personal data after account deactivation, fees, matching methods and more. The Consumer Council’s survey found that some dating apps may require users to disclose up to 12 pieces of personal information at registration, while all 9 apps in the survey would make use of users’ personal information for marketing or advertising purposes by default, only 3 of which offered opt-out arrangements. The Council reminds consumers that even though both the Terms and Conditions and Privacy Policy could be lengthy, as the use of dating apps may require disclosure of a large amount of personal data, consumers, prior to registration, should carefully examine the relevant terms to thoroughly understand the services provided and how their personal data is handled, so as to protect their own rights.

The Council also found that 1 app offered different subscription plans according to the user’s gender, whereas 2 other apps, which were owned by the same parent company, might charge different prices for the same service plan basing upon various factors such as user age and place of residence, with a disparity in monthly fee as high as 42%, without clearly stating the principles behind. The Council believes this is an unfair practice as users might be charged a higher price unknowingly.

From October to December 2022, Council staff, posing as general consumers, downloaded and trialled 9 dating apps that were relatively popular amongst Hong Kong consumers, all of which required registration before service. The survey revealed that the personal data required at registration was largely the same across all apps, including name, gender, sexual orientation, date of birth, location, email address, phone number, etc. Additional information on education level, occupation, interests, etc., could be submitted per users’ preference. Of the 9 dating apps, 1 only required the user’s gender and phone number to open an account, while 2 required up to 12 items of personal particulars, with 1 requesting users to answer a number of questions on their personal values, a relatively complicated and time-consuming process. As one’s physical appearance might be the most direct way to spark interest, 6 apps required users to upload photos with their face clearly visible, and non-compliance may result in account ban.

All 9 dating apps pre-set permission to use account owners’ personal data for marketing or advertising purposes, but only 8 had specified such use in their Privacy Policies. The remaining 1 app stated that personal information provided by users would only be used for provision of services, design of events, reference for internal operations, and statistical use. While the choice of words in the privacy statement was not directly linked with promotion and sales purposes, responding to the Council’s inquiry, the trader admitted that they were also included. Only 3 of the apps allowed users to opt out of the arrangement.

To help users seek an ideal match, nearly 90% (8) of the apps provided 2 to 6 basic filters for free, including gender, age, distance, place of residence, language, etc. The remaining 1 app provided up to 16 filters, including the annual salary and total assets. 6 apps offered advanced filters to their subscribers, with common options including height, education level, dating goals, family plans, lifestyle, etc. However, 1 app claimed on its app store pages and official website that its subscription plan could provide filtering by occupation, education level, height, country, or distance. However, the Council's trial revealed that the plan in fact only included 2 additional options, namely height and country, which did not match the claims and requires consumers’ special attention.

Consumers could deactivate or delete their accounts if needed. If an account is inactive for a prolonged period (ranging from 180 days to 30 months), 6 apps might automatically deactivate or delete the user's profile, after which the service providers will generally keep users’ information for 28 to 180 days before data deletion in accordance with their Privacy Policies. However, if a user's account is terminated due to violations, 3 apps will retain the account information for 1 year in case of investigation of unlawful or harmful conducts. 3 dating apps did not specify the retention period of users’ personal data, amongst which only 1 provided supplementary information upon the Council staff’s enquiry while the remaining 2 apps did not respond, reflecting much needed improvements in transparency in the handling of user data.

Gender May Be a Factor for Different Service Plan Offers

All dating apps in the survey did not charge for basic functions, but users could pay for a subscription to enjoy additional features. The price of basic subscription plans ranged from $78 to $235 per month and offered 4 to 6 additional features, typically including “additional likes” and “increased exposure”, etc. Advanced subscription plans were more expensive, with as many as 7 to 11 features, including “exploring more users”, “reconnecting with expired matches or chat invitations”, etc., with monthly fees ranging from $138 to $468. However, it was found that subscription options could vary by gender. For example, in 1 app female users were offered only 1 subscription plan but could still chat with male users without an active subscription, whereas male users had 3 plans to choose from but must pay for a subscription before being granted access to reading messages sent by female users and interacting with them.

Some overseas consumer groups have discovered that a specific dating app would set different pricing based on various factors, such as age. In light of this, Council staff conducted a test by registering a series of accounts covering users aged from 18 to 68 with intervals of 10 years and then checked the subscription prices of the app. Results revealed 3 combinations of price differences amongst the 6 age-specific accounts. The 38-year-old account was charged the highest, followed by the 18- and 58-year-olds, while the accounts aged 28, 48 and 68 were charged the lowest. For a 12-month subscription, the 38-year-old account owner will pay nearly 34%, 21% and 42% more than the lowest-priced group across the 3 subscription options respectively.

The findings were similar to those of a UK consumer group, i.e. this dating app imposes price discrimination on different users. Another Australian consumer group also reported that the pricing mechanism of this app may have taken into account not only the age of users, but also the operating system, device, location or even personal interests, which might actually be a complex algorithm. Upon review of the Terms and Conditions of this app, the Council could only find a statement claiming that its pricing varies by a number of factors, with little explanation of differential pricing, reflecting a lack of transparency. The Council received no response from the dating app after enquiries, which was disappointing. The Council believes that AI is a double-edged sword that boosts convenience to the public when used properly, but can also bring potential risks and unfair treatment to consumers when used inappropriately. As such, traders are encouraged to adopt ethical business practices when using AI.

Price discrimination was also found in another dating app from the same parent company, but the trader denied varying pricing based upon user age and claimed that the phenomenon could be due to the “random pricing tests” of the app.

Virtual items can also be purchased on dating apps, with functions similar to those of subscription plans, such as “indicating your interest to other users” and “increased interaction with other users”, but were only for single use with prices ranging from $15 to around $252,200. As virtual items are usually non-refundable and do not come with refund policies in the Terms and Conditions for some of the apps, consumers need to consider and assess the value of spending a significant amount on dating apps. The Council reminds consumers that dating involves compatibility and communication between the relevant parties, and is subject to factors such as opportunity, timing and personal affinity. Bearing in mind that subscription plans or virtual items might not guarantee more or better matches, consumer should carefully consider before buying.

The variety of dating apps have mushroomed in recent years, and online dating scams have also occurred from time to time. Consumers can refer to the following tips to stay vigilant when it comes to online dating: