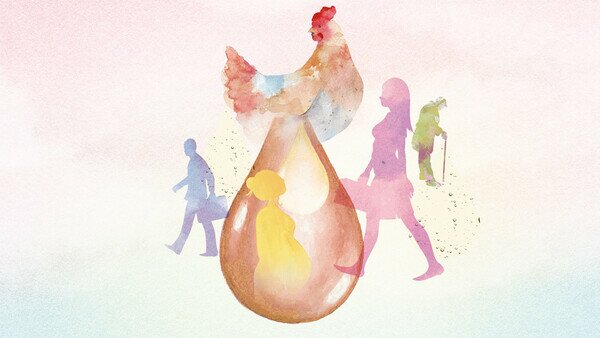 The Council sourced 15 common prepackaged samples of chicken essence products from key retail outlets. The samples included 1 traditional chicken essence, 10 distilled chicken essence, 3 boiled chicken essence and 1 vegan chicken essence ranging from $188 to $990 per box, equivalent to a cost per serving of $11.75 to $133, a 10-fold difference. For food safety, the samples were tested for the contents of preservatives, antioxidants, hormones and aflatoxins, while the nutrient content test covered total fat, saturated fatty acids, cholesterol, iron, sodium, protein and amino acids. The samples with the highest and lowest cost per serving both received an overall score of 5 points, reflecting that the price and quality and nutritional value of a product are not necessarily correlated. Consumers are reminded to compare and choose wisely.

Chicken Essence Products High in Protein with Amino Acids, Low-sodium and Nearly No Fat; Yet Fat Intake Should Not Be Too Low

Chicken essence products claim to contain various nutrients such as protein and amino acids, which help build muscles, repair cells and tissues and reduce muscle fatigue. The results showed that among the 14 samples in liquid formula, over 90% (13 samples) were high-protein foods, i.e., containing no less than 6g of protein per 100ml liquid food. The sample with the lowest protein content was found to contain 5.3g of protein per 100ml, a difference of over 1.4 times compared with the sample with the highest protein content (12.9g protein per 100ml). The only vegan sample was in solid form and contained 14.7g protein per 100g, which was also considered to be a high-protein food (containing no less than 12g of protein per 100g solid food). The high-pressure and high-temperature manufacturing process of traditional chicken essence, distilled chicken essence and boiled chicken essence products replaces the digestion process by protein digestive enzymes in the human body, which could ease the burden on the digestive system of individuals with abnormal secretion of protein digestive enzymes. Nevertheless, consumers with special needs, for example patients, individuals recovering from surgery, etc., should seek professional advice from doctors or registered dietitians if it is suitable for them to consume chicken essence.

Consumers with overweight concerns might be attracted by “zero fat” claim in chicken essence products. 7 samples were not detected with fat while 7 samples only contained 0.1g to 0.3g fat per 100ml/100g, which complied with the criteria to be claimed as “no fat” or “zero fat” or “fat free” on the labelling (containing no more than 5g of total fat per 100g solid food or 100ml liquid food). However, consumers should note that fat is an important nutrient just like proteins and carbohydrates. It is also the major source of energy to support physical activities. Insufficient fat intake might affect the production of cholesterol, vitamin D and hormones in the body and secretion of bile acids. The immunity might also be reduced.

Whole Foods Have Higher Protein Content but Cost Much Less

According to the Food and Drugs (Composition and Labelling) Regulations (“Labelling Regulations”), except for those exempted products, prepackaged foods must be labelled with the energy and content of 7 core nutrients. According to the Technical Guidance Noteson Nutrition Labelling and Nutrition Claims (“Guidance Notes”), the discrepancy between the declared and actual nutrient content of all prepackaged foods should be within the tolerance limit set out in the regulations. Comparing the nutrition labels and the test results of all samples, 3 samples did not comply with the requirements set out in the Guidance Notes. The actual protein content for 1 sample was 22.9% lower than its declared amount. The actual sodium content for 2 samples were 22.5% and 29.9% higher than the declared amount. Also, according to the Labelling Regulations, as there is no reference value for amino acids, prepackaged foods should not carry any related nutritional claims, yet the package of 1 sample was labelled with “rich in amino acids needed by the human body” which violated the regulations. The Council stresses that it is a fundamental consumer right to receive accurate product information. As supplements, nutrition labels are one of the important sources for consumers to judge if the product fits their health condition, not to mention chicken essence products might not be suitable for everyone. The Council urges agents or importers to add information on contraindications and instructions for consumption on the package.

In the test, only 1 sample was found to have 1.7g cholesterol per 100ml while the remaining samples were not detected with cholesterols. However, according to the Labelling Regulations, if a prepackaged food has on its label, or in its advertisement, a nutrition claim which is made in relation to any type of fat contained in the food, the content of cholesterol contained in the food shall also be set out in the list of nutrients. Out of the 10 samples with “no cholesterol” or “zero cholesterol” claims on their labels, 2 did not show the cholesterol content. Relevant information has been passed to the CFS for follow-up.

Beside checking the list of ingredients and instructions for consumption, consumers should note the following before purchasing: