Sweeter than Sweet! Beware of Health Risks! Even with Sweeteners Added, 40% of Sweetened Beverages Contained Free Sugar Content Reaching Half of the Recommended Daily Intake 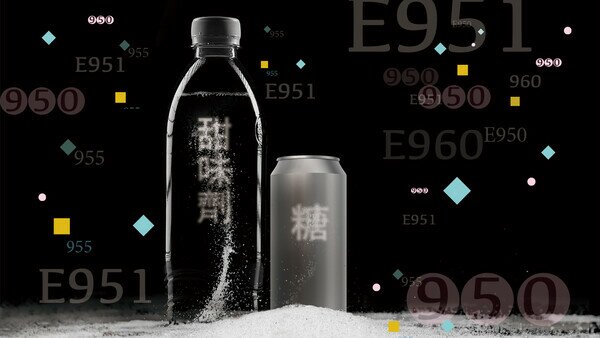 Health-conscious consumers with sweet tooth would opt for “zero sugar” or “low sugar” beverages in the belief that they are healthier choice for less sugar intake. The Consumer Council has tested 51 pre-packaged sweetened beverage samples and found that many samples were still rich in sugar even though intense sweeteners with zero calorie were added. Around 40% (20) of samples had a total sugar level of 25g or above per can/bottle, reaching half of the recommended daily intake level for free sugar (50g) as advised by the World Health Organisation (WHO). For 1 sample of canned drink of 473ml, drinking a full can would exceed the maximum daily intake of free sugar by 30%. Excessive intake of sugar or sweetener over a prolonged period could pose health risks. The Council reminds consumers to refrain from or reduce drinking sugar or sweetened beverages and shall maintain a balanced diet.

Sweetener is one of the sugar substitutes that is about 100 times to several hundred times sweeter than sucrose. Because sweetener has no calorie and does not affect blood glucose level, and it would not be digested nor absorbed by human body, it is thus suitable for some diabetic patients. However, some studies pointed out that sweeteners had their own hidden health risks. Excessive intake of sweeteners would diminish the sensitivity of taste buds and induce the desire for sweeter taste. Through absorbing more calories unconsciously from sugar intake, it may result in obesity in the long run, thereby increasing the risks of coronary disease, stroke or even death.

The 51 pre-packaged sweetener-laden beverages tested included 18 non-alcohol carbonated drinks (i.e. soft drinks), 16 sports and energy drinks and 17 other drinks, including fruit juices, yogurt drinks and flavoured bottled water. The volumes among the samples ranged from 57ml to 550ml per can/bottle and were priced at between $4 to $25. The Council reviewed the sugar content of the samples as listed on the product labels and also tested the amount of sweeteners they contained.

According to the Food and Drugs (Composition and labelling) Regulations, Cap.132W, products labelled with “low sugar” or “zero sugar” shall not contain more than 5g and 0.5g of free sugar per 100ml respectively. 15 samples labelled with “low sugar”, “zero sugar” or “diet” were found to comply with the requirement. As for the other 36 samples, the level of sugar ranged from 0g to 14g per 100ml and consuming the entire can/bottle will amount to free sugar intake of 0g to 66.2g.

Many beverages were still sugar rich even with sweeteners added. Based on WHO’s recommendation that for an adult with daily calorie intake of 2,000kcal, the recommended daily intake of free sugar should be limited to 50g. However, the study revealed that in 53% (9) of samples of other drinks, 33% (6) of samples of non-alcohol carbonated drink and 31% (5) of samples of sports and energy drinks, consuming 1 whole can/bottle would reach half or above of the recommended maximum free sugar daily intake level. For the non-alcohol carbonated drink sample with the highest sugar content, drinking a whole can would even exceed the daily recommended level by 32%.

Apart from reviewing the sugar levels of the samples, the amount of 4 types of sweeteners commonly used in beverages were tested in the study, including Acesulfame Potassium/ACE-K, Aspartame, Sucralose and Steviol Glycosides (i.e. the sweet component, Stevioside, Rebaudioside A).

Various scientific studies suggested that excessive consumption of sweeteners may pose health risks. For instance, sucralose was found to prohibit the growth of probiotics that will affect intestinal health. Aspartame contains phenylalanine, which is not suitable for patients suffering from phenylketonurics (PKU) as it might induce brain damage to the patients and hinder their intellectual developments. A cohort study involving over 400,000 individuals and conducted by scientists from the International Agency for Research on Cancer found that for people with a regular daily consumption of sweetened beverages, they faced a higher risk of cardiovascular diseases such as coronary diseases and stroke. For people with a regular daily consumption of at least 2 glasses of 250ml non-alcohol carbonated drinks added with sweetener, their mortality rate is 26% higher than those who drink less than 1 glass per month.

According to the Sweeteners in Food Regulations (Cap.132U) in Hong Kong, food manufacturers and food importers can only use or sell food products using the 10 permitted sweeteners but it does not stipulate the permitted amount of different sweeteners used in different types of food. Some sweeteners detected in some samples did not match with the information listed on the product labels while some samples did not have the names or identification numbers of sweeteners properly labelled as required by the law. The related information has been relayed to Centre for Food Safety for follow-up action.

According to Codex General Standard for Food Additives (GSFA), the maximum amount of sucralose used in water based flavoured drinks is 300mg/kg. In the test, 2 energy drink samples with the highest sweetener content, the 2 samples claimed 1,590mg/kg and 1,560mg/kg of sucralose respectively, exceeding the GSFA threshold by 4 times. While a lot of sports and energy drinks marketed as “energy boosting” or “enhance performance”, consumers should be careful when choosing functional drinks as they often contain high level of sugar or sweetener and excessive drinking would pose adverse health effects.

Consumers should only consume sweetened beverages moderately, especially when drinking sweetener-laden beverages. They should pay heed to the following:

－Weight conscious consumers might choose artificially sweetened beverages as a substitute for sugary drinks achieving weight loss. However, studies revealed that artificially sweetened beverages may actually increase sweet cravings and make people prone to consume sweeter food or food with stronger taste. To achieve weight loss, one should limit the intake of both sugar and sweeteners;

－Sports and energy drinks often give consumers a healthy impression. However, this study found that a lot of sports and energy drinks were added with sweeteners irrespective of their natural sugar contents. Unless there is a huge energy consumption which requires speedy energy and electrolyte replenishments, consumers should not drink this kind of beverage excessively or can consider diluting it with plain water and drink it sparingly;

－Some functional drinks may contain caffeine or other stimulants and therefore should not be consumed frequently. Consumers should check out the ingredients on product labels. Pregnant women, patients suffering from cardiac diseases, and “the 3 hypers” should exercise extra cautions.