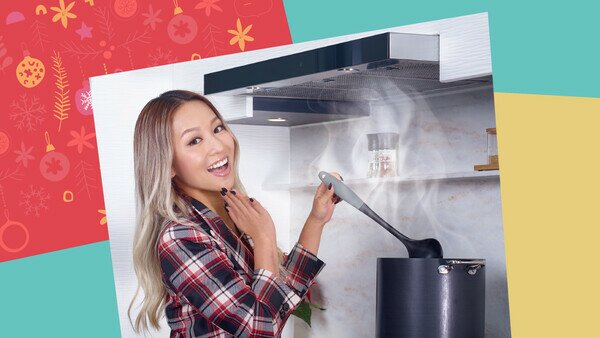 Chinese cuisine cooking boosts food taste with intense heat, but cooking fumes generated will impact indoor air quality and may cause cancer. In addition, nowadays many households prefer open-kitchen design, thus a cooker hood with good performance is of utmost importance for them. The Consumer Council tested 15 models of cooker hoods and found that their exhaust airflow rates may vary by 1-fold. Yet it was noticed the exhaust airflow rate and fan rotation speed may not be proportional to its extraction performance. Taking conventional dual-fan model as an example, for the model with the highest exhaust airflow rate, its grease extraction performance was the lowest in the same type of models. The price difference among the models was significant too. Among the 12 models that all rated 4 points, the lowest-priced and the highest-priced model varied by more than 1-fold in price.

The Council reminded that some cooker hood manufacturers advertise and promote the product's exhaust airflow rate and the fan rotation speed, but they may not specify the claimed value measurement method or standard on the leaflets. Consumers are advised not to compare directly the values provided by different manufacturers.

Of the 15 cooker hood models being tested this time, 7 were with conventional dual-fan design, 4 were with chimney style, 2 were with telescopic style, and 2 were with rectifier panel design. Among all of the models, 3 could be installed and operated in either air exhaust mode or indoor recirculation mode, and the rest could only be operated in air exhaust mode. Most of the cooker hoods used by local households run in air exhaust mode, which exhaust pipes must be installed. The cooker hood’s fans will first extract the fumes into the cooker hood, then the grease will be collected by oil cups or grease filters, or discharged outdoor through the exhaust pipes. The tested items included exhaust airflow rate, fan rotation speed, extraction performance, energy efficiency, noise level, safety level and ease of use.

The overall performance between the models are similar in general. Only 1 conventional dual-fan type model rated 3.5 points, and the remaining 14 models all rated 4 points or above. The overall performance of different types of cooker hoods did not differ much. However, the price between the models varied significantly, ranging from $1,998 to $5,530, a difference of about 1.8 times. It is worth noting that other than the 4 models that already have basic installation included in the price, the remaining 11 models are subject to an extra basic installation fee of $280 to $700.

It was also noticed in the test that the exhaust airflow rate and fan rotation speed are not necessarily related to the extraction performance. Taking the chimney type model with the highest overall score as an example, though its exhaust airflow rate of 675 cubic meters per hour and fan rotation speed of 1,710 rpm are not the highest among the models, its extraction performance is the best indeed. It rated 4.5 points in the 3 items of grease, odor and steam extraction.

As for the extraction performance of the remaining models, there are 1 telescopic type and 1 conventional dual-fan type models with lower grease extraction abilities. 4 conventional dual-fan type, 1 chimney type, and 1 telescopic type models were found with lower steam-extraction speed, or even had a little condensate drips down during the test, so they only scored 3.5 points in the corresponding item. Each model performed well in the odor test. After being operated for half an hour, they effectively reduced the concentration of strong odorous chemicals in the room by about 99%, rated 4.5 points.

Furthermore, the more grease collected by the oil cup and the grease filter of the cooker hood, the less grease remains inside the cooker hood and the exhaust pipe. Calculating the ratio of grease collected by the parts that are detachable for cleaning to the total amount of grease extracted, the resulting grease collection ratio of the models ranged from 37% to 89%. Among them, 1 chimney type and 1 conventional dual-fan type model had the lowest ratios of only 40% and 37% respectively. In terms of function, 3 conventional dual-fan type and 1 rectifier panel type models are equipped with auto-heat-cleaning and/or self-cleaning functions to clean the grease inside the cooker hood.

In terms of safety, only 3 models passed all safety test items, including 1 chimney type, 1 telescopic type and 1 conventional dual-fan type models. The others have room for improvement. 3 models underperformed in electrical safety, of which the voltage of the plug pins of 1 rectifier panel type model was higher than the standard upper limit after disconnecting from the socket-outlet for 1 second; in 1 conventional dual-fan type model, after opening the bottom plate, a small internal position had insufficient insulation protection, and another conventional dual-fan type model smoked after about 20 minutes of abnormal operation. When the bottom plate, fan guard, rectifier panel and/or filter of 7 models were opened, it was found that the test probe could access the fan blades; the plastic materials of the internal oil basin and/or pipe adapter of 8 models failed the flame resistance test.

The test also found that 4 cooker hood models was relatively noisy, with sound power level ranging from 72 to 73 dB(A), in general the loudness of which is similar to average street environment.

Consumers should pay attention to the following tips when purchasing and maintaining the cooker hood:

- Chimney type cooker hood has a high body and requires more space, while the telescopic design can be embedded under the kitchen cabinet, saving much more space;

- The cooker hood should be installed according to the manufacturer's instructions.  Note that the bottom of the cooker hood and the top of the gas cooking stove should be at least 65cm away to prevent high temperatures from affecting its safe operation;

- Read the product manual carefully, follow the instruction to clean the cooker hood regularly, so as to avoid grease accumulation to reduce fire risk;