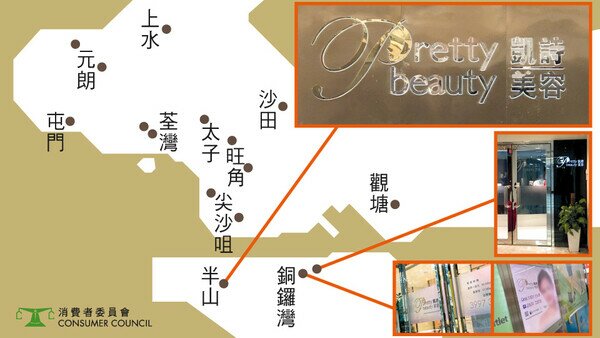 Today the Consumer Council named and reprimanded a beauty service group for adopting various undesirable trade practices, including luring prospective consumers to patronize; subjecting them to high-pressure sales tactics for pricey treatment packages; misleading terms of contract and charges; obtaining credit card payment without the consumer’s consent; exaggerating the effect of beauty services; and even refusing to refund to customers with disability – that resulted in serious financial loss and mental distress to the aggrieved consumers.  The Council firmly believes that such unscrupulous trade practices should be strongly condemned.  Despite repeated attempts by the Council in resolving the complaints, the trader has adopted an uncooperative attitude with no signs of improvement in its service. Meanwhile, similar complaints have continued to surge.  In the first 10 months of 2018, the total amount involved in consumer complaints against the trader has already exceeded by 2.5 times of the whole 2016, reflecting the trader's continued indulgence in unscrupulous sales practices and would continue to be rampant. To rectify the undesirable situation, the Council has decided to publicly name and reprimand the trader Pretty Beauty Centre and urge this trader to cease and desist from any further unscrupulous sales practices.

The Council stressed that the incident clearly demonstrated the vast disparities in trade practices adopted by operators in beauty industry.  To strengthen consumer protection, it is an opportune time to introduce the Mandatory Cooling-off Period in the beauty, fitness and time-share industries.  This would afford consumers who have signed contracts of substantial amount under duress and pressure of unscrupulous traders, with the right to cancel the contracts within a statutory period unconditionally, and furthermore to effectively interdict these unscrupulous trade practices.

The trader being named operates a total of 16 branches offering beauty services in skincare, slimming, and medical beauty services.  Based on the consumer complaints leveled against the trader, 4 types of the more frequently adopted unscrupulous trade practices could be summarized as follows:

In the past 3 years (2016 to Oct 2018), the Council received a total of 82 complaints against the trader, rising upward from 18 cases in 2016 to 35 cases in 2017, and 29 cases up to October this year.  The total amount involved also rose from $374,000 in 2016 to $683,000 in 2017 and then to $1.3 million in the first 10 months of 2018.  In the case involving the highest amount, the concerned staff deceitfully obtained the complainant’s credit card and related information on the pretext of a lucky draw, then claimed to be gifted with a free smart phone as a bait to induce the purchase of a beauty treatment of $168,000.  During the course of the treatment, 2 staff members took turn to persuade the complainant to use the credit card to make the purchase by 60 instalments.  The sales pressure became so unbearable that the complainant eventually succumbed and agreed to the purchase with great reluctance in order to leave the place as soon as possible.

Among the complaints, 60% (50 cases) involved unscrupulous sales practices, reflecting the extreme dissatisfaction of the consumers to such sales practices.  However, due to the trader's unresponsive delaying tactics and uncooperative attitude, the overall resolution rate for these complaints in the past 3 years was only 25%, making a big contrast when compared with the resolution rate of 73% in general cases or 52% in cases related to beauty industry.  The situation was utterly unsatisfactory.

Since last year, the Council has made repeated efforts to meet the trader for complaints handling, and a meeting with a staff member of the trader was eventually held in April this year.  In the meeting, the trader was urged to cease all its unscrupulous sales practices, and to seriously respond to consumer complaints.

However, 6 months after the interview, there was no significant improvement with 19 more complaints in the interim period of which only 2 could be resolved while another 7 were unable to reach a consensus and the remaining 10 cases received no response from the trader.  Apparently, the trader has not been serious in addressing the complaints nor to improve its service quality.

For years, the trade practices in beauty industry have been subjected to criticism in respect of its management and service quality that show vast disparities among traders.  In 2006, the Council collaborated with the trade to develop the Code of Conduct for the beauty industry which, however, turned out to be unsuccessful due to non-compliance and lack of active participation of the traders.  The Council reiterates that if voluntary measures could not effectively solve the problem, regulatory oversight should step in to prevent consumers falling victim, as well as protecting the good image of Hong Kong in the provision of quality goods and services.  In a recent published report on Mandatory Cooling-off Period, the Council has proposed for introducing a cooling-period in certain transactions (including unsolicited off-premises or distance contracts) in specific trades such as fitness, beauty and time-share etc, so as to enable consumers to cancel the prepaid contracts unconditionally within the stipulated period, in order to strengthen consumer protection.

The Government has responded positively to the introduction of the Mandatory Cooling-off Period as proposed by the Council and will later propose a legislative framework, followed by a public consultation.  The Council is eagerly looking forward to the early implementation of the related legislation which will not only go a long way to protecting consumer in transaction of specific trades but also help respective industries in their long-term development, leading ultimately to a win-win situation between the traders and the consumers.