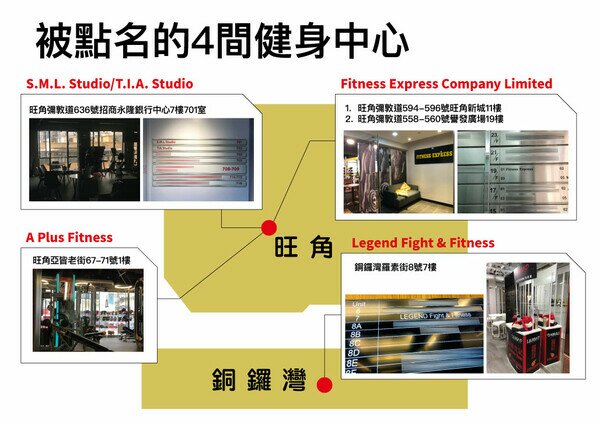 The Consumer Council is deeply concerned about the unscrupulous sales practices of some fitness centres which are detrimental to consumer rights and interests. After careful consideration, the Council today publicly names 4 fitness centres and strongly reprimands them for their undesirable sales practices targeting inexperienced young consumers. The complaint cases levelled against the 4 centres involved some $40,000 on average and in the most extreme case it stunningly reached the sum of $1.75 million.

In most of the complaints, the complainants were predominantly young people with over 90% of them aged 25 or younger, and some of them were even mentally incapacitated.  High-pressure tactics were deployed throughout the course of sales process.  Young consumers, under threats of personal safety, succumbed to the unrelenting pressure to sign the contracts so as to swiftly escape from the uncomfortable situation.  Some traders also resorted to unconventional payment methods, including taking the complainants to major chain stores to buy gift vouchers to pay for fitness centre memberships, or requiring bank transfers or electronic payments and in some cases the funds were transferred to the personal accounts of the salespersons.  Consumers were generally given only a copy of the signed contract but not an official payment receipt.  Recent complaints have indicated that they were not even given a copy of the service agreement.

Moreover, most complainants were allegedly forced to have a photo or video taken, or were made to declare and sign a statement that they had signed the contract of their own free will, and that they would not make any claims against the company in the future. Since the payments are made indirectly to the fitness centres, and there are no official receipts, it is incredibly difficult for consumers to seek legal redress in the face of such blatant disregard of consumer rights.

In recent years the market has seen the growing emergence of small independent fitness centres in areas frequented by young people, such as Mongkok and Causeway Bay.  Unscrupulous traders have seized the opportunity to set up fitness centres in small premises with limited gym facilities, so it’s hard to believe they have ever had a long-term development plan to provide quality service to consumers.

In general, the modus operandi of these centres involves staff first appealing to the sympathy of complainants to help filling out a questionnaire, and then luring them to a nearby fitness centre.  Once inside the premises, another sales team take over and use warm and friendly persuasion to lower the targets’ alertness as much as possible.  On the pretext of validating the questionnaire, they then coax the targets to hand over their credit cards and identity cards with the actual intention of drawing up a contract and transferring funds.

Over 90% of the complainants involved with these 4 fitness centres were under 25.  In the case of S.M.L. Studio/T.I.A. Studio and Fitness Express Company Limited, all the complainants were under 25.  By targeting young consumers like this, the traders are clearly taking advantage of their lack of experience and vulnerability to lure or force them to buy expensive fitness memberships.  It was further alleged that any attempts to leave the premises were often met with oral and even physical threats of the staff.

In the course of the sales process, the staff would trick the complainants into divulging information, such as credit card limits and bank account balance.  They would also offer to “accompany” the complainants to the bank to make a cash withdrawal or to a moneylender to take out a loan to pay for the membership.  In one complaint case, the salesperson learnt that the complainant had a fully paid insurance policy and $120,000 in the bank, so he convinced the complainant to transfer the entire sum online to the salesperson’s personal account.

In the past year, the Council received 160 complaints against the 4 fitness centres, involving $6.78 million.  In the case of the highest amount from A Plus Fitness, within a short period of 4 months, the complainant was persuaded to buy a 15-year membership and 1,050 private coaching sessions, totalling over $1.75 million.  Hundreds of thousands of this amount was borrowed from moneylender.  After explaining that the fitness centre could not open a credit card account, its staff asked the complainant to make electronic transfers to pay for the membership and coaching sessions through 20 transfers of some $1 million in total.

Despite repeated enquiries by the Council about how the fitness centre converted the gift vouchers to cash and deposited the cash into the company’s bank account, the centre staff refused to respond.

Before deciding to name the 4 centres, the Council had asked to meet the responsible persons and the staff of the 4 fitness centres.  S.M.L. Studio/T.I.A. Studio, which had been in business for just over a year and had attracted the most complaints (99), adopted a totally uncooperative attitude and refused any attempts for reconciliation. So far, none of the complaints against it could be settled.

Fitness Express Company Limited had also been consistently evasive with the Council and had a low successful conciliation rate of only 10%.  With regard to Legend Fight & Fitness and A Plus Fitness, though both had attended meetings with the Council in March this year and March last year respectively, they had not been fully active in taking responsibility for resolving the complaint cases.

Of the 237 complaint cases levelled against the 4 fitness centres from January 2018 to 28 February 2019, the Council referred 16 complaints to the Customs and Excise Department (CED) for follow-up whereas 51 complainants approached the CED direct to report their cases.  Two other cases are currently receiving assistance from the Consumer Legal Action Fund (CLAF).

The 4 named fitness centres represent only part of the problem in the industry. The Council will continue to be vigilant in monitoring the conduct of other fitness centres.  Once again, the unscrupulous sales practices adopted by these fitness centres have shown inadequacy of the existing Trade Descriptions Ordinance in protecting all consumers.  It is hoped that a statutory cooling-off period targeting specific business sectors can be implemented as soon as possible to enhance consumer protection.

The Council reminds consumers with family members who are young or mentally incapacitated to pay special attention to their daily activities and how they spend their money:

- Encourage them to be wary of all sales promotion activities and never lower their vigilance because of their sympathy to the salespersons or accept their invitation to visit unfamiliar premises.  They should never trust the mere oral promises of the salespersons and should insist that all details and related promises be clearly recorded in the official receipts and contracts;
- In all circumstances, they must carefully protect their personal information, such as identity documents, bank account information and cards, and credit cards.  They must never pass such important personal possessions to any sales persons as they could be used for unauthorized payments;
- They must always ensure that any payments they make are direct to the company selling the goods/services, and are not deposited to the personal accounts of the company staff. They must not accept any other payment methods such as purchasing cash vouchers or gift cards;
- If they are subjected to high-pressure sales tactics in a shop, they must stay calm and refuse to cooperate.  If necessary, they must notify family members or friends, and when it is safe to do so, leave the premises or seek police assistance;
- They must read carefully the terms and conditions of the service contract before they sign it, and if they find any discrepancies between the contract terms and the salesperson’s claims, they must raise the matter immediately.  If the discrepancy is not resolved, they must refuse to sign the contract and leave immediately;
- They must ask the trader to provide them with a copy of the signed contract for their records, and they must keep it in a safe place in case they need it as proof in seeking redress;
- If they were coerced into signing a contract for an unreasonable amount, they should discuss the problem with their family immediately.  If necessary, they should contact the Consumer Council for help, or report it to the Customs and Excise Department or the Police.