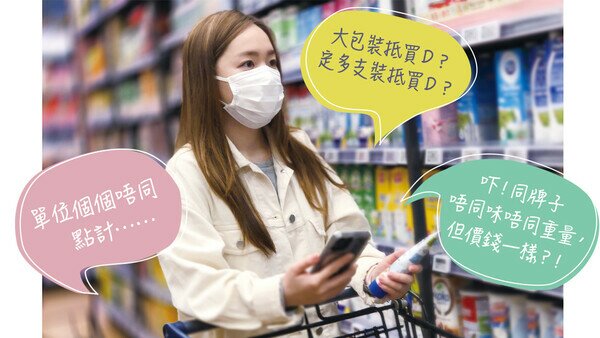 When doing grocery shopping, many may be influenced by “traditional wisdom” and consider bigger or multiple packages more of a bargain than smaller packages or a single item. The Consumer Council gathered the pricing information of 12 categories of pre-packaged food products from 4 large supermarket chains, and revealed the “real” price of each product by calculating the respective unit price based on their net weight or net volume. The result showed the unit price of bigger packages was not necessarily cheaper than smaller packages, whereas the unit price of products in cases might be more expensive than a single item. In addition, although different flavours of the same product/brand were marked with the same price, their unit price could vary up to 80% due to different net weight or volume. The unit price of the same product/brand having identical weight, but different packaging could also vary from over 40% to 60% due to different packaging. Since there is no uniform standard adopted by supermarkets when displaying the net weight or net volume of each product on shelves, and products of the same type may be packed using different dimensions, such as weight, volume, or size, the product with the lowest marked price on the shelves might not be the best value for money. Besides, consumers may find it difficult to compare the prices directly, impeding price comparison.

The Council suggests that large supermarket chains take the lead and make reference to related policies and experiences from overseas countries and regions, like Australia, Canada and the United States, to display the unit price of products with a standard unit measurement (e.g. per 100g or per 100ml). This could help consumers shop wisely through easy price comparison between products of different packaging and brands.

The survey was conducted in December last year. The price information of 12 categories (over 1,000 items) of pre-packaged food from 4 large supermarket chains were collected for 4 times. The categories covered “breakfast cereal”, “evaporated milk/condensed milk”, “fresh milk/milk beverage”, “packaged rice”, “edible oil”, “carbonated soft drinks”, “canned food”, “pasta sauce/ketchup”, “sugar”, “jam/peanut butter”, “tofu” and “fresh produce”. Prices collected were converted to unit price of “per 100g” or “per 100ml” based on its net weight or volume. Products with larger variance in their unit prices were sorted into different groups for further analysis. Examples included 20 groups of products of the same brand in which the unit prices of smaller packages were lower than bigger packages; and 18 groups of products of the same brand in different flavours and same marked price but came in different weights, etc.

For products of the same brand, different flavours although packed alike and marked with the same price, the unit prices of different flavours may vary because of their different net weight or volume. Among the products, 18 groups had a more obvious discrepancy in their unit prices. For example, the unit price of the “original” flavour and “maple & brown sugar” flavour of 1 instant oatmeal sold in 2 supermarkets was $33.9. However, its “original” flavour weighed only 224g while its “maple & brown sugar” flavour weighed 328g. In unit pricing, the “original” flavour was 46.3% more expensive than the “maple & brown sugar” flavour. Another example of 1 pasta sauce from 1 supermarket, the net weight of 4 different flavours ranged from 75.3g (peperoncino) to 135g (tomato cream). Although they were all sold at the price of $29.9, their unit prices ranged from $22.15 to $39.71 with a difference of 79.3%.

To conclude, consumers should not simply take the marked prices of products for price comparison. The Council recommends supermarkets to make reference to related regulations and experience from overseas jurisdictions and indicate the unit price of products in addition to their marked price. For instance, Australia has implemented Mandatory Unit Pricing Code as early as 2009, which applies to traders who are selling the minimum range of food-based grocery items like bread, butter, fresh fruits, and vegetables, and groceries retailers with more than 1,000 square metres of floor space and online retailers are required to indicate the unit price on shelves and publicity materials. Mandatory or voluntary unit pricing policies were also implemented in some states or regions in the United States. Related unit pricing regulations in Quebec, Canada came into effect in 2001, requiring traders to indicate the unit price of relevant products apart from their selling price. Although there is currently no unit pricing policy established in Hong Kong, the Council urges large supermarket chains to take the lead by providing the unit price (e.g. per 100g or per 100ml) information in standard unit on price tags, and apply the same to products using other unit measurements at a later stage, so that consumers could make a well-informed price comparison between different products and retail stores.

Moreover, consumers may make reference to the Council’s “Online Price Watch” (https://online-price-watch.consumer.org.hk/opw/) for daily updates and price comparison of over 2,200 popular products from 6 major supermarkets, with functions including unit price, top price differences and price drops. The website also displays the price changes of each product in the past 3 months by providing the lowest price trend of the latest 30, 60 and 90 days, which allows consumers to keep up with the price trends without going to the supermarkets.