70 Samples of Crispy Snacks Found to Contain Acrylamide, a Probable Carcinogen 9 Samples of Potato Chips and Potato Sticks Detected to Have Acrylamide in Excess of EU Benchmark Levels Over 80% of Samples either High in Fat or in Sodium Eating One Pack of 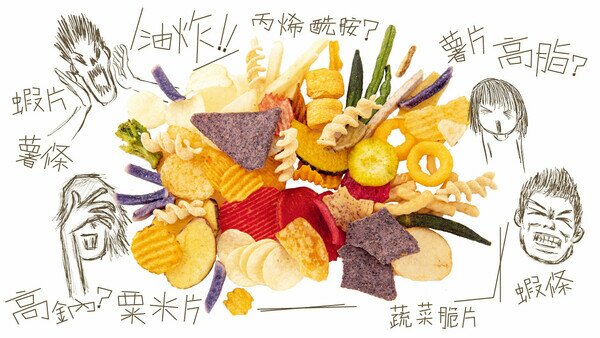 Potato chips, potato sticks and prawn crackers are popular snacks. They easily tempt both adults and kids into eating pack after pack. Opening a pack of potato chips” may even be a form of stress relief for many people staying home during the epidemic. The Consumer Council has tested 77 samples of pre-packaged and non-prepackaged potato chips, prawn crackers and other crispy snacks made from different ingredients. It has found that except for 1 sample of veggie chips and 6 samples of prawn crackers, all other samples contained acrylamide, a probable carcinogen. Of these samples, pre-packaged potato chips and potato sticks had the highest content of acrylamide, with more than 30% of them containing acrylamide in excess of the benchmark levels of European Commission Regulation (EU). In addition, almost all samples of pre-packaged potato chips and potato sticks were found to be high in fat. Among them, the total fat content of 3 samples was more than double the high fat level (20g/100g of food) set by the Centre for Food Safety (CFS).

Samples of pre-packaged prawn crackers and prawn sticks, corn chips and corn sticks, and quinoa chips tested were found to have relatively lower acrylamide and total fat content, but their sodium content on average was high. Excessive intake of sodium may increase the risk of hypertension. With reference to the “Nutritional Guidelines on Snacks for Students” issued by the Centre for Health Protection, such snacks are classified as “Snacks to Choose Less”.

The test also included 10 samples of French Fries (Ready-to-eat), potato grids and hash browns which were popular in fast food chain stores. Acrylamide in 3 of them was above the relevant benchmark levels of Commission Regulation (EU). 2 samples were high in sodium and 2 were high in fat. Regular customers should be aware of the hidden health risks.

Acrylamide is a substance widely used in industries, classified as “probably carcinogenic to humans” (Group 2A) by the International Agency for Research on Cancer. Acrylamide is formed in some foods as a result of the chemical reaction between reducing sugars (such as glucose and fructose), which are naturally present in food ingredients, and an amino acid called asparagine under high temperature. For instance, as potatoes contain a relatively abundant amount of asparagine in free-floating stage, acrylamide will be formed when potato chips and potato sticks are produced by deep-frying and baking, cooking methods in which the temperature is high (above 120 °C) and the amount of water is small.

All Potato Chip and Potato Stick Samples Found to Have Acrylamide

30% of Which Exceeding EU Benchmark Levels

The Council at the same time tested 10 samples of non-prepackaged ready-to-eat French fries, potato grids and hash browns purchased from restaurants, fast food shops and snack stores. The tests also made reference to the European Commission Regulation (EU) 2017/2158, but the benchmark level of ready-to-eat French fries is set at a lower level of 500μg/kg. Acrylamide found in these samples ranged from 38μg to 964μg/kg. The difference was about 24 times, with an average of 392μg/kg. 3 samples (30%) contained acrylamide above the benchmark level. On the whole, the average acrylamide content in pre-packaged potato chips and potato sticks was higher than that of non-prepackaged products. The Council reminds consumers who fancy eating crispy snacks that the amount of acrylamide in both pre-packaged and non-prepackaged crispy snacks varies greatly. They should choose products with lower acrylamide so as to reduce the health risk.

Although the acrylamide levels detected in 7 prawn cracker and prawn stick samples, ranging from 19 to 566μg/kg, did not exceed the benchmark level of 750μg/kg and were on average the lowest among all pre-packaged snacks category, its content level should not be ignored.

While there are currently no maximum levels for acrylamide in food have been set up by the Codex Alimentarius Commission (established by the Food and Agriculture Organization of the United Nations and the World Health Organization) and in the international arena, the Council expects that the Government studies the EU’s approach to set benchmark levels to verify the effectiveness of the mitigation measures for various kinds of food produced by local food trade and advice local food manufacturers to reduce the levels of acrylamide in food as well as to evaluate the effectiveness of the measures taken by food manufacturers to reduce the acrylamide levels in their products.

With reference to the criteria set by CFS, foods that contain total fat in excess of 20g/100g are regarded as high in fat and may increase the risk of cardiovascular disease. 82% (55) of the pre-packaged crispy snack samples were high in fat. Among them, pre-packaged potato chips and potato sticks were the worst. All except 1 were found containing high fat, with 3 of them having fat content levels above 40g/100g, more than twice the high fat standard. 1 sample of purple potato sticks claiming to be of local origin had the highest total fat content at 43.0g/100g. Based on the recommended serving size of 17g, consuming one serving means taking in 7.3g of fat. Another sample of potato chips claiming to be originated in South Korea had total fat of 31.9g/100g. Its recommended consumption of a whole pack (115g) would amount to 36.7g of fat, reaching 61% of the daily total fat intake limit (60g).

Non-prepackaged ready-to-eat snack samples had total fat content ranging from 10.0g to 22.7g/100g, with an average of 15.2g/100g. Among them, 2 samples were high in fat, with acrylamide content detected also above the benchmark levels of the European Commission Regulation (EU). In the test, the sample of freshly fried “large fries” was found to have the second highest average total fat in every 100g of food. Consuming a whole pack (464g) means taking in about 103g of total fat, which exceeds the daily fat intake limit by over 70%. Comparing the overall test results, the average total fat content of the samples of pre-packaged potato sticks and potato stick products was 30.5g, which was double that of non-prepackaged samples of potato chips, potato grids and hash browns.

Among the 38 samples of sweet potato and batata-type chips, veggie chips, corn chips and corn sticks, quinoa chips, and prawn crackers and prawn sticks, 27 (71%) were found to be high in fat. Measured in total average, the lowest was a quinoa product (average content is 18.7g/100g).

Prawn crackers and prawn sticks are nearly all high in sodium

Consuming a pack may take in 70% of daily limit

According to the recommendation by WHO, the upper limit of sodium intake by adults is 2,000mg per day. Excessive intake would increase the risk of high blood pressure. Foods are regarded as high in sodium if they carry more than 600mg/100g. Averaged for every 100g, the content of sodium in pre-packaged prawn crackers and prawn sticks was 924mg, quinoa chips 746mg, corn chips and corn sticks 614mg. These 3 kinds of snacks were all high in sodium. The sodium content of 4 samples (31%) of prawn crackers and prawn sticks was over 1,000mg/100g. Among them, 1 sample of prawn sticks claiming Malaysian origin contained 1,320mg of sodium per 100g. Therefore, consuming 1 whole pack (105g) would mean taking in 1,386mg of sodium, reaching nearly 70% of the daily limit. There were 29 samples of pre-packaged potato chips and potato sticks with an average sodium content of 502 mg/100g. Among them, 8 samples were classified as high in sodium, with the highest sample containing 917mg/100g.

As for the non-prepackaged potato sticks, potato grids and hash browns, the 10 samples have sodium contents ranging from 52mg to 706mg per 100g, with a difference of over 12 times, and the average sodium content was 373mg/100g. Among them, 2 potato wedges and potato grids were considered as food with high sodium.

Some of the samples of pre-packaged crispy snacks tested carried indications of a recommended serving size, ranging from a small amount of 15g to a whole pack of 115g. However, most consumers usually would pay no attention to these recommendations. Some even could not stop eating and would go on to finish the whole pack. For example, 1 sample of corn chips and corn sticks indicated a recommended serving size of 28g but if consumers ignore this note and eat a whole pack (226.8g), they may take in about 78g of total fat and more than 2,000mg of sodium, both exceeding the relevant daily limits for adults. The Council also reminds parents that the total fat intake limit for small children is generally lower than that for adults, so they have to carefully help their kids to control the amount of high-fat snacks eaten in order to avoid the risk of obesity. The Council also urges manufacturers to indicate an appropriate recommended serving size according to their food formulations.

Consumers should control the intake of crispy snacks and pay attention to the following: