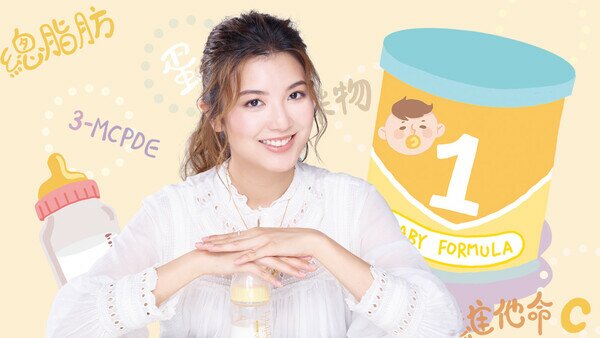 It is the wish of every parent to have their newborn babies growing up healthily. They would spare no efforts to choose ‘’the healthiest" and "most nutritious" infant formula for their children. However, choosing the right brand among the wide variety of options available in the market can be a headache to parents as most brands claim to have unique formulations that can enhance the physical growth and cognitive development of infants. According to the Consumer Council’s test on 15 models of pre-packaged infant formulas, all were found to contain the contaminant 3-monochloro-1,2-propanodiol (3-MCPD). The tolerable daily intake (TDI) set by the European Food Safety Authority (EFSA) will be exceeded if the test sample with the highest level of 3-MCPD is consumed as recommended on the product label.

While some brands of infant formula could cost twice as much as others, the test results showed that the energy and the 33 nutrients contained in different models were roughly the same. The Council stresses that while parents might find the advertising claims of infant formula products irresistible, there is in fact no significant difference in terms of nutrient contents. The overall scores of the different samples are good and parents who want to spend their money wisely do have choices that offer value for money.

The test also found that the difference between certain nutrient content of 6 models and that specified on the product label exceeded the tolerance limit. The L-Carnitine content of 1 model was nearly 40% below the declared value. The Council has provided all test findings to the Centre for Food Safety (CFS) for follow-up.

The items tested included heavy metal, phthalates, contaminants, microorganisms, energy, the amount of 34 nutrients, and a review of the accuracy of product labelling.

3-MCPD Detected in All Models

3-MCPD is identified as a contaminant. According to reports released by the Joint FAO/WHO Expert Committee on Food Additives (JECFA) and EFSA, excessive daily consumption of 3-MCPD over a prolonged period would adversely affect the kidney functions and the male reproductive system of laboratory animals. In recent years, 3-MCPD, expressed as 3-monochloro-1,2-propanodiol esters (3-MCPDE), and a genotoxic carcinogen called glycidol, expressed as gylcidyl esters (GE), were found in food such as palm oil and infant formula. They are formed during high-temperature refinement of vegetable fat. Studies also revealed that through hydrolysis of 3-MCPDE and GE in intestinal tracts, 3-MCPD and glycidol with toxicological properties would be released respectively.

All 15 models were found to have 3-MCPD ranging from 13 to 120ug/kg. Taking a one-month old baby weighing 4.3kg as an example, the Provisional Maximum Tolerable Daily Intake (PMTDI) of 3-MCPD and 3-MCPDE set by JECFA is 17.2ug (independent or total) while the standard set by EFSA is more stringent with Tolerable Daily Intake (TDI) at only 8.6ug. Using the model with the highest level of 3-MCPD as an example, the content is 120ug/kg. If an infant is fed according to the recommended amount on the label, a one-month-old infant would consume 106g of formula, with an intake of 3-MCPD exceeding the TDI of EFSA. For infants who are fed with infant formula only, the health risk is higher.

Glycidol is classified as a genotoxic carcinogen and is present as GE in food. Consumers are advised to minimize the intake as far as possible. In the test, 9 models were found to contain GE with levels ranging from 1.1 to 29ug/kg, all of which were below the EU's maximum level (50ug/kg).

The test also found that the 15 models contained trace amounts of lead. The model with the highest level contained 0.010mg per kg, which was in full compliance with the Food Adulteration (Metallic Contamination) (Amendment) Regulation 2018 due to be implemented in November this year and also the maximum level of the Codex Alimentarius Commission (Codex) standard (0.01mg per kg). This content level should not pose a risk to the health of infants and toddlers. Chronic lead poisoning could hinder the development of the nervous system, causing anemia, high blood pressure and digestive system symptoms; result in the impairment of renal functions, nervous system, and fertility; and bring about adverse pregnancy outcomes. A trace amount of di-butyl phthalate (DBP) was detected in 1 model, which was far below the safety action level set by the CFS.

Breast milk is recognized internationally as the ideal source of nutrition for infants. The nutritional composition provides the optimal balance for an infant’s growth and development. However, some mothers cannot breastfeed for various reasons and infant formula has become the sole source of nutrition for their infants. Therefore, it is vital to ensure the quality and safety of infant formula. The Council emphasizes that infant formula is not just an ordinary commodity, but an important food item that affects infants’ long-term health and well-being. At present, there is no specific regulation in Hong Kong to regulate the content of 3-MCPDE and GE in infant formula milk. To enhance the safety of infant formula, the Council opines that the Government should closely monitor international developments, conduct timely reviews and consider introducing relevant food safety standards and regulations to the territory.

Among the 15 pre-packaged infant formulas tested, 13 were cow’s milk protein-based and 2 were isolated soy protein-based. The claimed weight ranged from 800g to 900g, the price ranged from $250 to $539. The average cost per gram ranged from $0.31 to $0.59, with a nearly one-fold difference. The test results showed that, the overall safety, quality and nutritional content of the models were roughly the same, with an overall score from 3.5 points to 4.5 points. The brands with the lowest price ($250) and the highest price ($539) both scored 4 points. The model with the highest overall score of 4.5 points costs $309, once again showing that price does not necessarily correlate with product quality.

Current regulations require that infant formula products contain energy and 33 nutrients ("1+33") and 29 nutrients must be specified on the product label. The remaining four nutrients that are not mandatory to be listed include: linoleic acid, α-linolenic acid, myo-Inositol, L-Carnitine and DHA. The test results show that although variations existed in the energy and 33 nutrient contents among different samples, they (including nutrients that are not required to be declared) all met the range specified by the regulations, and the ratio of DHA to total fat also met the ratio requirement of Codex (not exceeding 0.5% of the total fat content). Under normal consumption, all models should meet the related nutritional needs of healthy infants.

Non-compliance of 6 Models in Nutrient Labelling

In this test, the actual nutrient content of each model was compared with the declared value as shown on the nutrition label. Although the energy and nutrient content of all models (including nutrients that are not obliged to be listed) fell within the range stipulated in the regulation, certain nutrients of 6 models were found to have discrepancies that exceeded the tolerance limit of “Technical Guidance Notes on Nutritional Composition and Nutrition Labelling of Infant Formula, Follow-up Formula and Prepackaged Food for Infants and Young Children”. In the model with the highest price in this test, the content of vitamin A measured was 21.9% lower than the declared value.

Being provided with accurate nutrition information is a basic right of consumers. The test results clearly indicate that there is room for improvement in the production of these products and the Council urges manufacturers to address the concerns promptly.

Parents should pay attention to the following when purchasing and preparing infant formula: