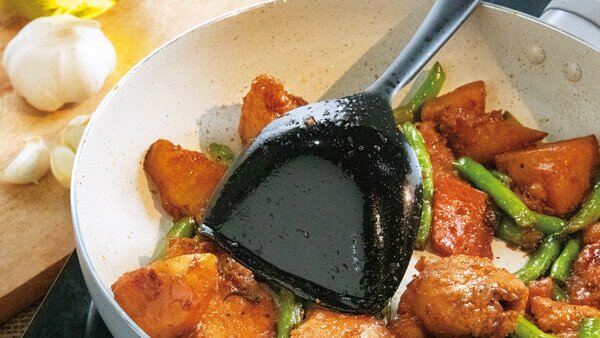 Plastic turner is one of the essential kitchenware for many households as it is inexpensive, lightweight and will not damage the non-stick coating on frying pan easily. The Consumer Council tested 17 models of Chinese-style plastic turners and found that 1 model failed to meet its claimed heat-resistance temperature with its head being melted and deformed when soaked in peanut oil at 200oC within 1 minute. The test results also showed that more than half of the models used for cooking sour food and the other 3 models used for cooking food with alcohol had overall residue migration exceeding the EU limit. 5 other models failed in meeting the EU requirements of primary aromatic amine (PAA) migration of which 1 model with the highest migration content exceeded the standard by 11 times, reaching a PAA migration level as high as 9.7mg/kg and thus, rated merely 1.5 points in total score.

Plastic turner is in direct contact with food during cooking and migration of toxic substances from the turner to food may bring health issues after consumption. The Council urged the related departments to make reference to the safety regulations of other countries in relation to materials with food contact so as to evaluate if it is necessary to strengthen the measures in regulating such materials, in a bid to further enhance the safety of consumer goods.

The price of the 17 Chinese-style plastic turner models ranged from $12 to $99. The tested items included heat resistance level of the plastic part of the turner head. Food safety tests were conducted with reference to the EU 10/2011, which is a more stringent and comprehensive European testing methodology in food safety test for materials with food contact, to examine the overall migration, PAA migration, nylon monomer caprolactam and hexamethylene diamine migration.

All models were labelled with heat-resistance temperature or the claimed highest temperature, ranging from 180oC to 260oC. As there is currently no international standard in testing the heat resistance of plastic turner, an in-house test method was adopted by soaking the turner’s head in peanut oil at 200oC for 15 minutes, then taking it out and cooling down for 4 hours, in order to test the heat resistance level of the models. The results revealed that the performance of 5 models was unsatisfactory of which 1 model melted and deformed within 1 minute when soaked in boiling oil, failing to withstand its claimed heat resistance of 220oC. 2 models were found deformed slightly, 1 model was found with blisters on it and 1 model had slight color change after the test. Consumers are advised not to have the habit of leaving the turner in a hot pot when cooking to avoid damage or accelerating the product ageing.

The test also included immersing the models in different kinds of food simulants to obtain the overall migration when using plastic turner on various food. 9 out of the 17 models failed to meet the EU standard limit (10mg/dm2) during the test simulating the cooking of sour food with 3% concentration of acetic acid, reaching a migration content from 10 to 120mg/dm2. The model with the highest migration content (120mg/dm2) even exceeded the standard limit by 11 times and 2 out of the 8 models meeting the standard were in fact found close to the upper limit. When immersed the turner in alcoholic food with 10% ethanol, 3 were found with migration ranging from 12 to 14mg/dm2, exceeding the EU limit (10 mg/dm2). Except 1 model that could not withstand the high temperature and the test on it could not be completed, all models were in compliance with the limit (10mg/dm2) during the test simulating the cooking of fatty food.

Some PAA have potential risks of causing cancer and may migrate to food through kitchenware and food packaging, hence the EU standard of PAA limit is “not detected”. The test found that the migration of PAA of 5 models ranged from 0.02 to up to 9.7mg/kg, and the remaining 12 models without any PAA detected, reflecting that there is room for manufacturers to improve their selection in raw materials and production process.

The tests of plasticizers and metal elements of all models met the standard requirements. Exposure to nylon monomer caprolactam or hexamethylene diamine may cause irritation of skin, eyes and respiratory system. 3 models were found to contain caprolactam, in the level of 6 to 9mg/kg, which were in compliance with the EU standard (15mg/kg). The hexamethylene diamine content of the remaining models was below the detection limit.

Plastic turners may melt or deform when used under high temperature and various chemical substances may migrate to the food. On the contrary, wooden or bamboo-made turners are natural materials and are more environmental-friendly than plastic turners. However, they should be cleaned or kept dry properly to prevent moisture and mildew. Consumers are advised to note the following when purchasing and using plastic turners:

If deep frying or prolonged heating or stirring of food is required, it is suggested to use wooden, bamboo-made turners or other proper kitchenware.