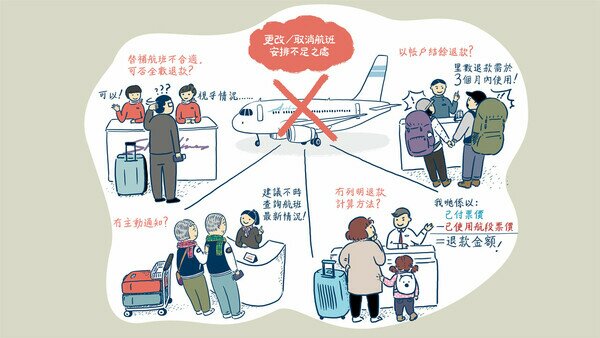 Many people would be away for vacation during the Christmas and New Year holidays, yet it would be rather disappointing and may even cause monetary loss if the flight is delayed or cancelled. The Consumer Council reviewed the terms stipulated by 20 airlines, and found that they all stated the flight time shown on flight ticket does not form part of the contract, or remarked that the airlines reserve the right to change the flight time at any time and therefore airlines might not be liable for the passengers’ loss caused by flight change. The survey also revealed that customer service staff of 16 airlines failed to explain to passengers in details the remedial arrangement caused by flight delay or cancellation. The Council emphasized that low information transparency of airlines’ compensation policy and poor customer service quality have always been criticized by consumers. In reviewing the overbooking situation of flight tickets earlier this year, the Council has already raised similar problems. The aviation industry is thus urged to take the issue seriously and implement measures to strengthen its customer service.

When the Council studied the terms stipulated by airlines, it was found that as European and American airlines were regulated by the respective local laws, their compensation policies on flight delay and related arrangement were better than that of those Asian airlines. Among all, the European Union (EU) regulations are the clearest. The Council advised other airlines to make reference to that of the EU by notifying passengers of any time change flight in a timely manner and compensate for consumer’s loss accordingly should an airline make any sudden flight change shortly before the scheduled departure.

The survey covered 20 airlines with relatively high seat capacity from various regions, including 10 Asian, 4 European, 2 North American, 2 Middle East, 1 Australian and 1 African airlines. Based on the public information on their official websites and phone enquiries through hotline, the survey examined the remedial measures, assistance to passengers in arranging alternative flight, liability for loss and refund arrangement etc in case of flight delay or cancellation.

Flight time is the most important consideration for consumers when purchasing flight tickets as some would prefer “departing early and returning late” while some would want to meet the dates of local festivities when selecting flight time and date. However, it was found in the survey that among 20 reviewed airlines, 16 of them indicated in the terms that the flight time shown on flight ticket does not form part of the contract, which means airline may change it whenever they deem necessary; 4 of them even stated they reserve the right to change flight time at any time.

It is worth nothing that in addition to having the right to change flight time, 6 airlines even listed in the terms that they may change the flight time without prior notice while another 3 did not specify whether they would notify passengers for any schedule change, meaning that passengers flying with these 9 airlines would be at risk of not receiving any notification in case of flight schedule change. The Council thus advised consumers to act cautiously and check for any flight schedule update from time to time before departure.

In case of flight delay or cancellation, passengers may generally choose from one of the following 3 remedial options: to carry on the journey with the other flight arranged by the airline, rebook the journey to the same destination at a later date or request for a refund should the passenger not satisfy with the arrangement offered by the airline. In general, all the airlines have a refund option, but 6 stated that they would only do so if such delay was due to circumstances within the airline’s control, such as flight rescheduling or mechanical malfunction of the aircraft etc.

The survey also found that 4 airlines would only refund the unused portion as credit for future travel. Yet consumers should take note that different airlines may set an expiry date on the refund credit with one only valid for 90 days from the date of issue, and such credit would be forfeited upon expiry.

EU, Canada and the US have regulations sets out airline’s obligations in case of flight delay, thus airlines based in these 3 regions are required to provide compensation or proper assistance for flight delay. In the US, the required assistance is determined by the number of hours the passengers stranded at the aircraft; in Canada, the amount of compensation would be based on the length of delay at arrival of final destination, ranging from CAD 400 for delay between 3 and 6 hours to CAD 1,000 for delay over 9 hours; as for the EU, it is determined by the flight distance, ranging from EUR 250 to 600.

Airlines based in the 3 above-mentioned regions are obviously better than those Asian ones in terms of compensation. Among the 10 Asian airlines, only 1 stated that it would offer monetary compensation for flight delay. Consumers should be aware that, all flights departed from EU are protected under EU regulation. Therefore, passengers from flights operated by any airlines departing from EU are entitled to the above-mentioned compensation in case of flight delay. However, the obligation to offer compensation are only applicable to flights operated by EU airlines flying into the EU region.

Moreover, various airlines may run the same route collaboratively to reduce operation cost. Yet, it was revealed in the survey that 16 airlines stated that they would not be liable for any loss caused by a code-shared flight operated by another carrier. Moreover, 9 of which also stated that they would not be accounted for providing any assistance for code-shared flight operated by another carrier. Hence, consumers must pay special attention when purchasing flight ticket of another operator as it is rather difficult to identify the liable party in case of dispute, making it more difficult to seek redress and compensation.

The survey also included calling the customer service hotline of various airlines to inquire about the specific arrangement for flight delay and cancellation, and only 4 airlines were able to explain the company’s related arrangements in detail. The remaining 16 often answered “it depends on the situation”, some airlines even have different sayings from different staff, leaving a big puzzle to passengers. The Council is of the view that the industry should strengthen the training of frontline customer service personnel, and ensure they provide clear and consistent handling to consumers.

In terms of information transparency, 19 airlines had independent chapters listed in the Conditions of Carriage of the website to state the arrangement for flight delay and cancellation, but 1 of them did not have relevant information available online. Consumers can only call the hotline by themselves to check. In addition, once passengers opt for refund, 4 companies did not specify the method of calculating the refund, meaning there is room to improve transparency.

Many consumers prefer purchasing flight tickets from travel websites in recent years. The Council inquired twice to 4 such websites on arrangements for flight delay and cancellation, all of them responded that “it is arranged by the airline” and “subject to the policy of the airline”. None could state in detail the options to consumers in case of flight cancellation. A website indicated that any change of flight ticket or claim should be handled by the website, and that a handling fee will be levied under all circumstances the flight ticket is to cancel. The Council reminded consumers that the related details listed in the carriage terms only applicable to those flight tickets directly purchased from the 20 airlines reviewed in this survey. If consumers purchase flight tickets through travel agency or travel website, they must make a claim via corresponding travel agency or travel website in case of flight delay or cancellation, possibly increasing the difficulty to seek redress and the time required for doing so.