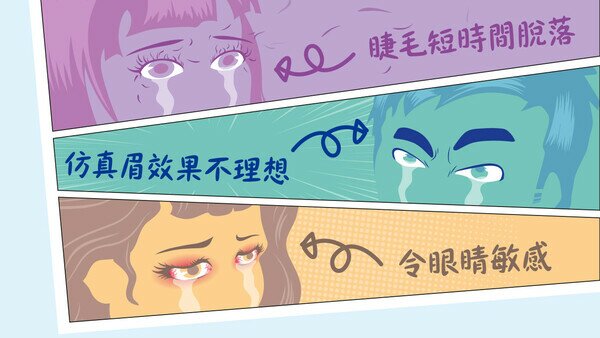 As festive season arrives, many people who love dressing up would spare extra effort in beautifying themselves, thus many may consider eyebrow tattoo and eyelash implant beauty services to brighten and sharpen their eyes. But complaints lodged with the Consumer Council have shown wide variation in the quality of such beauty services, which can negatively affect one’s appearance or give rise to allergic reaction. As the effect of these services is semi-permanent, consumers may not be able to reverse it themselves if the result looks unnatural, and may well end up spending long hours to remove it or pay extra money for remedial service.

There is a wide array of beauty services targeting eyebrows, eyeliners and eyelashes in the market these days. Relying on the descriptions or promotional claims of the services alone is unlikely to help consumers determine the techniques used or their effectiveness, so consumers are advised to evaluate the risks and safety concerns inherent in these beauty services prior to making any decisions and compare the reputation, service details, safety and prices amongst various service providers. They should be mindful of the sales tactics using different pretexts.

Case 1: Choosing imitation eyebrows service upon persuasion with threefold increase in price but ended up with disappointing results

The complainant intended to purchase a $680 eyebrow tattoo service from Beauty Parlour A but was persuaded by staff to switch to a service that would produce a better effect of imitation eyebrows. After seeing the sample photos, he was satisfied that the effect was better and agreed to receive the service even though the price was nearly 3 times more. However, as it turned out his eyebrows looked very unnatural. They were overly dark and thick, and did not have a well-defined shape, as if the eyebrows have been drawn with a marker pen. Since the effect was unacceptable, the complainant needed to purchase a correction fluid in a hope to improve the effect for an additional cost of $680. Later, he learned from a friend that imitation eyebrows should not be coloured to such an exaggerated extent and that the eyebrows should not be asymmetrical. The complainant was greatly shocked and complained to the Council to demand a refund.

In response to the Council’s conciliation, Beauty Parlour A refused to refund as the correction fluid had been opened but offered the complainant the option of trying another treatment or product of equivalent value, and he was also advised to return to the Parlour for another eyebrow makeover. But the complainant had entirely lost confidence in the Parlour and would consider taking civil action to seek redress.

Case 2: The latest eyelash implant technique advertised on social media could not last long and fell down almost entirely

The complainant was enticed by a social media advertisement of Beauty Parlour B that promoted Japanese-style eyelash implants with the latest technique that promised a natural effect. She joined a trial use for newcomers at $298, but was soon persuaded to add $150 to use an allergy-free glue and to book in advance for 3 sessions of eyelash implant treatments for $1,000. As eyelash implants generally last for only 1 month, she agreed to the deal. The complainant then followed the instructions to avoid rubbing her eyes forcefully when washing her face but the newly implanted eyelashes began to fall off within only 3 days and looked embarrassingly uneven. Although Beauty Parlour B repaired the implants, there was still no improvement as the eyelashes fell out almost entirely within 5 days.

Parlour B insisted that the effect of eyelash implants varied from one person to another, so it refused to provide a refund but only agreed to let the complainant change to another beauty service of equivalent value. The complainant did not come back with a further request.

The complainant went to Beauty Parlour C for an eyeliner tattoo service, including 1 colour and 1 re-colour session for a total price of $1,850. Upon returning home after the treatment, both eyes became swollen, itchy and painful. The next day she consulted a doctor, who indicated that it might be caused by the eyeliner tattoo ink coming into contact with her eyes. She complained to the staff of Beauty Parlour C who verbally promised to provide a refund but later said they needed to seek their company’s approval.

One week later, the manager of Beauty Parlour C contacted her and said that they had never received a similar complaint from other customers and that it might have been due to her relatively sensitive skin. The Parlour suggested that the remaining unused re-colouring service be changed to an eyebrow tattoo or other treatment. However, the complainant declined lest there would be another adverse allergic reaction. She lodged a complaint with the Council, requesting that while she had no intention to seek compensation for her medical expenses, the remaining half of the service should be refunded: i.e. $900. Also, the complainant had paid cash for the treatment without official receipt, so the payment could be proved only in the communication records with Beauty Parlour C.

Beauty Parlour C explained that the charge for the eyeliner service did not divide colouring and re-colouring as 2 separate items and reiterated that no refund would be provided because of the customer’s sensitive skin but proposed changing the unused re-colouring part to another facial beauty service. The complainant was advised to pursue her case for a refund through the Small Claims Tribunal.

- Ask the service provider to explain in concrete terms on the technique used and expected effect, and never simply believe the promotional or verbal sales claims;

- Take note of the business information concerning the service provider: for instance, its actual trading name and address in the supply of the service, and compare it with the promotion information on the social media platform to see if they match. Ask for the receipt of the transaction, particularly if payment is made in cash or electronically to individual accounts so to be able to produce documentary proof in case of future dispute;

- Eyebrow tattoos, eyeliner tattoos and eyelash implants generally last for only a short period of time and require regular maintenance to retain the effect. Before the start of the service, ask about the related maintenance details, whether the fees and charges cover future maintenance, and the number of colouring or re-colouring sessions, etc;

- During the implant or tattoo process, the tools used, or the glue or ink may accidentally come in contact with the eyes, causing discomfort and even infection. Therefore, before undertaking such beauty services, carefully assess the risks, and if you experience a serious allergic reaction, seek medical help without delay.