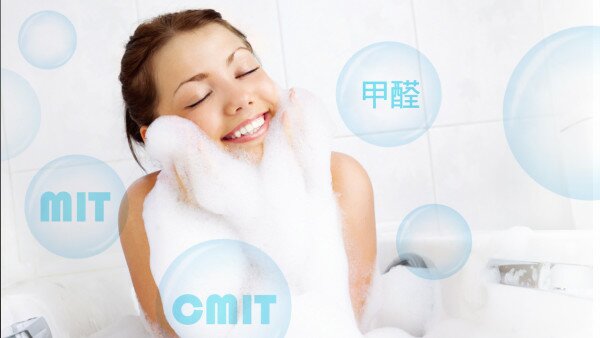 Throughout the seasons of the year, bathing products have become a necessity to almost every family.  From the cheap to the expensive, there is a wide variety of choices available in the market. Some claim to have refreshing aroma while some tout their natural ingredients. However, if the bath lotions contain certain chemicals or preservatives, they may induce skin allergies and cause itchiness and discomfort.  The Consumer Council tested 60 models of bath products and found that over half of the models contain 1,4-dioxane; 23 models contain allergy-causing MIT and / or CMIT, and the 7 models contain formaldehyde which might cause skin irritation.

In the 1,4-dioxane content test, 33 models were found to have a concentration varied from 1.1ppm to 16ppm.  According to the announcement of the China Food and Drug Administration and the "Safety and Technical Standards for Cosmetics" to be coming into effect at the end of this year, the 1,4-dioxane content limit for cosmetics is set at 30 mg/kg (or ppm).  Therefore, all models tested were in compliance with the standard.  European Union (EU) Scientific Committee on Consumer Safety (SCCS) was of the opinion that the safety level of 1,4-dioxane content in cosmetics should be 10ppm or less.  In other words, 3 models were found to have the content higher than the SCCS recommended level.

1,4-Dioxane is not used as an ingredient in cosmetics and manufacturers generally would not deliberately add such substance into the formulations.  It is believed that this chemical was a by-product generated from chemical reactions during the manufacturing process.  Certain reports stated that short-term exposure to 1,4-dioxane vapour may cause eye and respiratory tract irritations.  However, the contact time of skin and bath products is in general quite short and they will be washed away.  Under normal circumstances, the 1,4-dioxane content level in the models tested should not cause harm to consumers' health.

Some consumers may have allergic reactions to certain preservatives.  The ones causing the most concern are "methylisothiazolinone" (MIT) and "methylchloroisothiazolinone" (CMIT).  Mainland and EU cosmetics regulations stated that in cosmetics MIT level should not exceed 0.01% (100ppm) or CMIT/MIT mixture level should be less than 0.0015% (15ppm).  According to the EU cosmetics regulations effective since last July and the Mainland standard to be coming into effect, no additional MIT should be added to rinse-off products containing CMIT/MIT mixture.

The test results revealed that 23 models contained MIT and/or CMIT.  Among them, 14 models contained either CMIT or MIT at levels that complied with the Mainland and the EU regulations.  9 models were found to contain both CMIT and MIT, with 1 model having a relatively higher total content.  Under the circumstances that simultaneous use of MIT and CMIT/MIT mixture was allowed while it's manufactured, the MIT and CMIT content level of that sample was still in compliance with the current regulation in Mainland requirement and the then regulation in EU as the product was manufactured.

Among the 7 feminine washes models, 2 were found to contain MIT.  If there were wounds on ladies' private parts, using products containing MIT might have a higher chance of inducing discomfort.  Although MIT content of the tested models complied with regulations, considering these products are to be used on private areas and 1 product did not show a list of detailed ingredients, if consumers could not find out about the product information on its label, the chance of inducing skin allergy might be increased.

In addition, the Council also discovered that 2 models found with MIT or CMIT/MIT mixture in the test did not indicate such ingredients on their labels.  The Council urged the agents to inspect their product formula and labelled information to ensure the product ingredients are accurately listed for reference by consumers.

7 models were found to contain another common allergen, free formaldehyde, with a content ranging from 0.024% to 0.077%, lower than the maximum allowed concentration stipulated in Mainland's Hygienic Standard for Cosmetics and EU Cosmetics Regulation of 0.2%.  However, the stipulation also required that should the free formaldehyde content exceeded 0.05%, the product must label "contain formaldehyde".  The Council found that 3 models with formaldehyde emission level higher than 0.05% did not indicate this on their labels to remind the consumers.

For those who are allergic to formaldehyde, exposure to low doses could already induce adverse skin reactions such as symptoms of allergic contact dermatitis, itchiness, as well as rash.

Pathogens were not found in all tested models.  Only 1 model was found to have an aerobic bacterial count (170,000CFU per ml) 169 times exceeding the upper limit of the Mainland Standard, with molds and yeast count (2,900CFU per ml) 28 times higher than the upper limit.  Although MIT and CMIT were listed on the labels of the product samples, they were not detected in the relevant tests.  This was the only sample which failed the preservative efficacy test, indicating that either the amount of preservatives might be insufficient or they had lost their potency.  Other models could effectively inhibit the growth of microorganisms within the 28-day test period.

If consumers used any products with microbial contamination, the risk of infection on skin, eyes and intimate areas of their bodies may be increased.

The Council reviewed information on sample labels and found that 14 models did not list out detailed ingredient information.  When comparing test results with information on product labels, discrepancies were found between the labelled and the actual data collected from tests in 3 of the tested models.  In addition, 13 models either have no expiry date or showed only the period-after-opening indications.

When purchasing bathing products, consumers should not choose a product based on the manufacturers' claimed effects.  Among the 27 models detected with MIT, CMIT and free formaldehyde, many boasted their "natural/organic ingredients", "dermatologist recommended/approved", as well as "suitable for sensitive skin", etc.  Consumers should read the product ingredient information in detail.  People with sensitive skin should avoid using products containing MIT, CMIT and ingredients which may release formaldehyde.  After using such product, consumers should pay attention to any skin abnormalities that may occur.

The Council recommends the following tips for bath products selection: