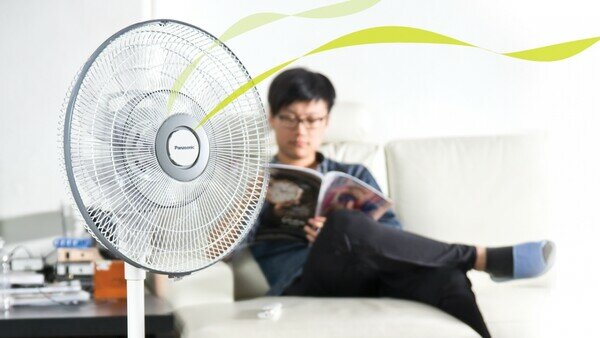 With the tidal waves of summer heat sweeping across the city, many families choose to use air-conditioners together with fans or in turns to save electricity bill.  The Consumer Council and the Electrical and Mechanical Services Department (EMSD) jointly tested 14 pedestal fans for safety and performance, and found that the average energy efficacy of direct current (DC) fans was 1.2 times higher than that of traditional alternate current (AC) fans.  In other words, using DC fans can save more electricity cost.

In terms of power savings, in the comparison of air delivery performance per watt of power used, the DC samples delivered 1.5 to 4.3 cubic metres of air per minute, while the AC models produced 1 to 1.4 cubic metres of air per minute only.  The energy efficiency of the DC samples was 1.2 times higher than that of the AC samples on average.  Though the soft-touch-controlled AC samples and the transformer in the DC models consumed some power in standby mode, it was only about 0.4 to 1.1 watts.

The tested DC electric fans were relatively more power efficient than the AC models because of the difference in motor operation and speed adjustment.  Most of the traditional AC electric fans had induction motors.  While spinning, especially at high speed, a higher current flows through the motor, it will result in more heat loss that affects efficiency.  The new DC electric fans used inverter-type motors, whose speed is adjusted electronically, thus delivering higher efficiency and finer speed control.

For air delivery performance, the test referred to the recommended national standard GB/T13380 from the Mainland (similar to international standard IEC60879).  Findings showed that the overall performance of the DC samples was better than that of the AC ones.  The best performing DC samples delivered 87 cubic metres of air per minute; but another DC sample delivered only 28 cubic metres of air per minute, marking a difference of two times with the best performing one.

For noise performance, perhaps due to optimized design on the motor speed and stability of the DC mechanism, the DC samples were quieter than the AC samples in general.

The safety test was conducted with reference to the international standard IEC 60335-2-80, examining the samples’ construction, heat resistance of materials, markings and instructions.  A large majority of samples passed the major items, but the power cord fixing device of one AC sample did not pass the pull and twist test on the cord, which indicated a potential risk of electrical fault.  Users are advised not to tug hard on the power cords when moving their fans.

In addition, the edges of metal mesh, clips and blades of some fan samples were very sharp.  Consumers are reminded to be extremely cautious when installing, cleaning and using the fans and to prevent children from sticking their fingers or objects inside the fan shroud.

The Council suggests consumers protect the environment by reducing carbon emissions in daily life.  Listed below are some tips for using fans: