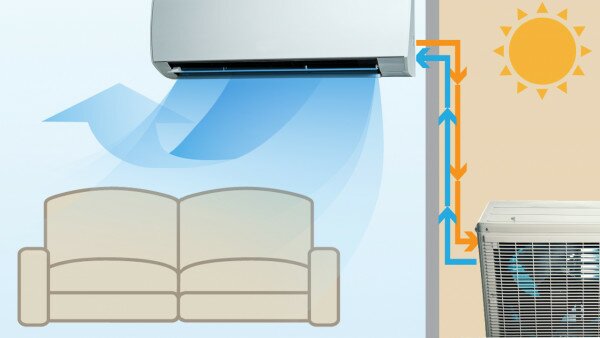 If consumers value comfort in the summer heat but want to follow sustainable consumption principles, choosing an energy efficient air conditioner is probably the answer.  The Council's test results showed that samples of inverter type air conditioners use approximately 40% less energy annually than fixed capacity type and the difference in electricity cost can be up to 90%.

The test results showed that the inverter type air conditioner is more energy and cost efficient than the conventional fixed capacity type.  The compressor of the inverter type sample initially operates at high speed to adjust the room temperature to the preset level.  Once accomplished, the compressor automatically reduces its speed to save energy; while the compressor of fixed capacity type air conditioner can operate only at top speed; it pauses and restarts repeatedly to regulate the room temperature; hence, the higher energy consumption rate.

Under the new grading standard of the existing Mandatory Energy Efficiency Labelling Scheme (MEELS), all the samples tested reflected the energy efficiency grades which were indicated on their respective energy labels.   All the inverter type samples tested were rated Grade 1, 3 fixed capacity type samples were rated Grade 3, and 1 fixed capacity type sample was rated Grade 4.   In the test, the measured energy consumption of one of the fixed capacity type samples was 11.1% higher than its rated value.  The Electrical and Mechanical Services Department (EMSD) selected sample of the same model from the market for compliance monitoring testing, which yielded energy consumption 4.5% higher than its rated value.  Though the discrepancy was within the acceptable tolerance level of 10% under the MEELS, the EMSD had urged the manufacturer to enhance the quality and energy efficiency of its products.

With reference to the international standard IEC60335-2-40, all samples passed the safety tests in terms of leakage current, earthing continuity, etc.

The Council also surveyed the after-sales service for the tested models.  All new machines came with a one- to three-year "whole machine warranty", with their compressors generally having a longer warranty period commonly at 5 years.  A warranty extension costs $610 to $1,500 a year with free on-site inspection provided for consumers located in urban districts.  For consumers located in remote areas, an on-site inspection fee of $130 to $420 is charged for most models.

The Council appeals to agents to proactively promote sustainable consumption by offering a longer warranty period, and lower annual renewal fees and maintenance charges to extend the lifespan of machine and reduce the disposal of electrical appliances that could still be used.