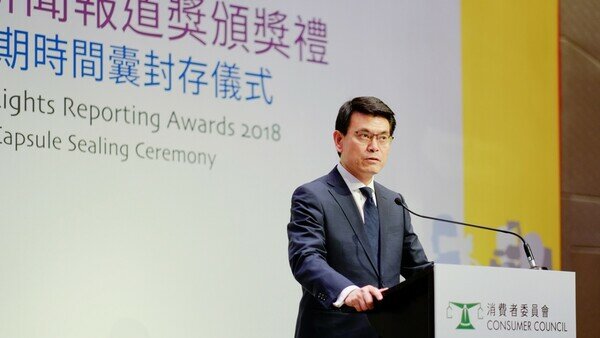 The 18th Consumer Rights Reporting Awards Presentation Ceremony, jointly organised by the Consumer Council, the Hong Kong Journalists Association and Hong Kong Press Photographers Association, has been successfully concluded. The Awards has reached a historic new high in the number of entries since 2008, receiving a total of 259 entries for the annual contest this year.  The CRRA, now in its 18th year, are coveted professional honours that recognise outstanding consumer rights reporting, with the aim to arouse an increased sense of concern, among the media and the public, over issues of consumer rights and interests. Since last year, the CRRA has embraced web-based media into the competition in keeping with the ever-changing ecology of the journalistic world.  Entries from web-based media this year jumped more than a double over the last year, indicating the wide support and acceptance of CRRA by the media in its various platforms.

At the CRRA  Presentation Ceremony today (31 July), a total of 30 awards for the 7 categories, and 4 additional Sustainable Consumption Awards were presented by the Secretary for Commerce and Economic Development, Mr. Edward, Yau Tang-wah, GBS, JP, and Chairman of the Council’s Publicity and Community Relations Committee, Mr. Chan Kam-wing.

In his welcome speech, Mr. Chan said, “The media is the eye of society and a close ally of the Council for many years.  I am most delighted to see from the winning entries the power of the media as displayed by our friends in reporting courageously on consumer issues of divergent public views and opinions, exposing without fear undesirable trade practices, in a joint effort with the Council in the defence for consumer rights.”

On this occasion was also held in celebration of the monthly publication CHOICE which has just turned 500-issue old, a special time capsule sealing ceremony.  Together, Mr. Yau, Mr. Chan and Council representatives officiated at the ceremony with a collection of memorabilia including CHOICE Issue 100, 200, 300, 400, and 500, and a range of complimentary souvenirs for subscription of CHOICE.  Included in the capsule were also appreciation cards from Mr. Yau, readers and members of the public expressing their well wishes and expectations for CHOICE.  The Council firmly believes that the strong public expectations of CHOICE will provide the vital momentum to drive the publication forward to yet another 500-issue milestone.

Highlight of the Awards Presentation Ceremony

Together, Mr. Yau, Mr. Chan and Council representatives officiated at the ceremony with a collection of memorabilia.