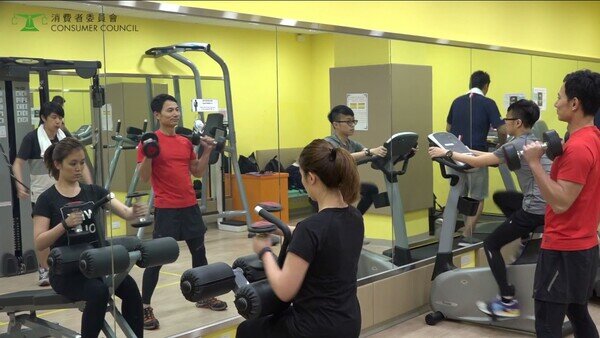 The Consumer Council expressed strong indignation of a fitness centre chain for deploying intimidating and misleading sales practices to pressure consumers into purchasing membership and high-priced private lessons.  Existing members and new customers were all subjected to the heavy handed sales pressure of the centre which resulted in their monetary loss and mental suffering.

The past three years have seen consumer complaints against this fitness centre rising continuously from 227 cases in 2013 to 296 cases in 2015, an increase of 30%, representing 51% of the total complaints (577 cases) the Council received against fitness centres last year, with nearly 90% involved  sales practices.

In early January this year, the Council held a meeting with the centre's management to express strong dissatisfaction against their continued undesirable sales tactics deployed despite the Council's repeated advice.  The meeting was followed by a formal letter at the end of the same month, warning the centre that if no immediate improvement was made, further actions would be taken against them. The centre remained uncooperative. In the first three months of 2016, complaints leveled against this centre continued unabated rising to 71 cases, which accounted for 29% increase compared to the same period last year.  In view of this serious situation and to prevent further consumer entrapment, the Council decided to publicly name and sanction the centre today (28 April).  This is also the very first time that the Council publicly named and sanction a fitness centre for their malpractice.

In 2015, a total of 296 complaints were lodged against the centre with an amount of over $8.5 million involved that accounted for nearly 20% upsurge from $7.15 million registered in the previous year.  Among these cases, 22 of them involved more than $100,000 each with the highest amount recorded in one case a hefty $570,000.  Over 100 cases reported involve transactions of less than $10,000 each.

According to details provided by the complainants, victims of such malpractice came from all walks of life.   Half of the complainants were new members who were pressured or misled into signing membership agreements. Some were allegedly forced to take pictures of themselves smiling to prove that they joined the centre voluntarily before being released from the premises.  The vulnerable groups lacking the necessary ability or experience to resist the high-pressure tactics of the centre staff became easy targets of bullying.

Other than new customers, existing members were not spared either.  One of the complainants joined the centre in 2013 for a 7-year membership at a fee of over $20,000. Within the following two years, the complainant was persuaded on different occasions to purchase private classes worth nearly $550,000.  The complainant sought Council's help for a refund of the unused $200,000 private class fee as classes worth $350,000 had already used or expired. Unfortunately, no agreement could be reached between the two parties after conciliation. The complainant and her family decided to pursue the case through lawyers and requested the Council to refer it to the Customs and Excise Department (C&ED).

In 2015, out of the 243 cases lodged against the centre with pursuable grounds, only 106 cases (44%) received total refund while 66 cases (27%) were only partially refunded.  Generally, it took the Council a longer than average handling time of some six to nine months to settle each case. The centre's performance was dissatisfactory and led to unnecessary financial and psychological pressure of the complainants.

The centre's sales tactics possibly have constituted a violation of aggressive commercial practices under the Trade Descriptions Ordinance. The Council has made 25 referrals to the C&ED for further investigation; and 8 other complainants opted to take legal actions on their own.

In summing up the complaint cases, the intimidating sales tactics of California Fitness were identified as follows:

Calling for legislation to introduce cooling-off period, and to protect consumer rights under pre-payment mode of consumption

The Council noted that besides California Fitness, there are other fitness centres in the marketplace deploying similar intimidating and misleading sales practices.  These centres are more willing to, upon the Council's intervention, provide full refund to the complainants.  It is hoped that through this naming sanction, the industry will review their discipline, manage their frontline staff stringently and provide quality service that is fair and reasonable to consumers. The Council will continue to monitor the trade practices of fitness centres and liaise closely with the enforcement agencies.

To further protect the interests and rights of consumers, the Council reiterates its call to study the legislation for the cooling-off period regime to safeguard consumers against pre-payment transactions such as fitness services.

As early as 2010, the Government began consultation to combat unfair trade practices, in which the proposal of mandatory cooling-off periods was included, but the measures have not yet been implemented to date. As the intimidating and misleading sales practices deployed by the fitness and beauty industries are becoming more rampant, the Council opined that the Government should take urgent action in studying cooling-off period as early as possible. To offer consumers comprehensive protection, it is suggested that the implementation can be first introduced to the two mentioned industries, and gradually extended to include other relevant sectors.

There are examples of mandatory cooling-off regime specific for fitness industry in other territories, for instance, in some districts of Australia and Canada, where consumers are protected by cooling-off arrangements. In Taiwan, Consumer Protection Act has also enacted measures to safeguard on consumers interests in prepayment consumption.

Be wary of sales traps and be on full alert

Consumers are cautioned to pay particular attention to pitfalls relating to membership, package coupons, and other pre-payment service contracts: