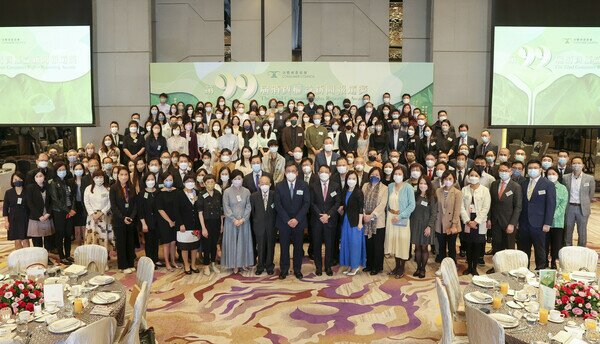 As a signature annual event within Hong Kong’s media industry, the Consumer Rights Reporting Award (CRRA) entered its 22nd year with a noteworthy revamp announced earlier in the year. Bolstered with various enhanced new features, the revamped Award is now organised independently by the Consumer Council. A record-breaking 311 entries was received this year from 40 media networks, social media platforms, and local colleges and universities, including 8 media organisations which participated for the first time ever.

The CRRA Presentation Ceremony was officiated today (24 Nov 2022) by the Secretary for Commerce and Economic Development, The Honourable Algernon Yau Ying-wah, JP alongside the Chairman of the Consumer Council, Mr Clement Chan Kam-wing, MH, JP. Nearly 160 management members of media organisations, journalists, awardees and academics attended the ceremony to celebrate this grand moment and congratulate award winners together.

A total of 34 awards in 7 categories were presented, including 7 Gold Awards, 7 Silver Awards, 8 Bronze Awards, and 6 Merit Awards. The awards also included a newly established category – “Best Use of Social Media in Consumer Advocacy” with 3 award tiers including the “Best Audience Engagement” (3 awardees), “Best Presentation” (1 awardee) and “Grand Prize” (1 awardee). Last but not least, the prestigious “Grand Award” was presented as the finale of the ceremony.

The revamped CRRA is infused with multiple groundbreaking innovations such as the introduction of the Social Media Category, increased cash prize for each award, and also the first-ever piloting of public voting mechanism for two of the awards (“News Photography Award” and “Tertiary Student Journalism Award”) which attracted over 2,000 voters. The CRRA is now more in congruence with the paradigm shift towards social media journalism and contemporary mode of news dissemination. With the newly established “Best Use of Social Media in Consumer Advocacy” category, the Council hopes to encourage all-rounded media coverage of consumer news to further enhance the public’s awareness of consumer rights. For this year, several award-winning entries were related to medical, wellness and beauty industry issues, believed to be due to heightened interest in these issues driven by the pandemic. At the same time, a high number of novel beauty products and services boasting multiple functions have emerged in the market which might cause not only hidden health risks but also consumption traps for the public.

In the welcome speech at today’s ceremony, the Council Chairman Mr Clement Chan Kam-wing said, “The Consumer Rights Reporting Awards is a signature event organised by the Council every year. We aim to commend our media partners’ effort in promoting consumer rights. The respectable coverage we presented today has shown us that consumer issues can be tackled and analysed comprehensively via the lens of the media, be it traditional or new media, online or offline. These news reports not only improve the public’s understanding of consumer rights, but also allow the Council to keep our fingers on the pulse of society, to monitor various trending consumer issues and take swift action to protect consumer rights.”

The Guest of Honour, The Honourable Algernon Yau Ying-wah, thanked the Consumer Council for their efforts in consumer protection as well as the media’s support in advocating for consumer rights through reporting, “As socio-economic conditions, information technology and consumption culture have continued to evolve, it is essential for us to keep pace with the times and pay attention to consumer protection issues that are of concern to the general public. In recent years, consumption modes have drastically changed, with online shopping and digital wallets becoming more prevalent. Amidst the rapid development of e-commerce, consumers are in need of more comprehensive and unbiased information, so as to consider whether the products and services are suitable for them and make smart choices.”

In addition, the CRRA introduced the new “Topical Reporting Award” with “Protecting Consumers Under E-commerce” as the topic for 2022. “The Council hopes that media could leverage their influence to monitor the market and promote consumer protection amid the digital economy. Here I encourage all media friends to participate actively and submit relevant news entries next year,” Mr Clement Chan added.

One of the highlights of the revamped CRRA is the introduction of the “Best Use of Social Media in Consumer Advocacy” category. As the first local journalism award to pilot a social media category, the judging criteria includes 3 aspects, namely the content, presentation and engagement of the entry to encourage social media platforms to promote consumer rights leveraging the Council’s published content (including test or survey reports, infographics, videos, etc.).

Apart from the awards in each category, a “Grand Award” (selected from the Gold Award-winning entry in each category) was presented to honour the most outstanding journalistic report of the year. After a stringent evaluation and voting process, the adjudication panel has chosen “News Magazine: Beauty from Injection?” (新聞透視：越打越靚？), which was the Gold Award winner for the “Video Reporting Award (Long Clips)”, to receive the “Grand Award”. TVB reporter Ms Fung Hoi-ling who managed the winning entry was awarded with a trophy and a cash prize of HK$20,000.

This year’s Feature Writing Award went to the “Consumption Voucher Series” (消費券系列). After in-depth investigation, the reporter discovered that a large number of social media pages offering various consumer voucher cash-out services have emerged, which allowed consumers to “cash-back” their voucher by means of fake transactions, account transfer or purchasing agent services. To investigate the details of the transaction, the reporter contacted the seller anonymously via a sting operation. This investigative series monitored the fluctuation in grocery prices after the disbursement of Consumption Vouchers and revealed that many merchants had raised their prices of goods and services from time to time across different stages of the Consumer Voucher Scheme.

The Gold Award for the Investigative Reporting Award went to the “Immune Cell Therapy Investigation Series” (免疫細胞療法調查系列), which exposed a clinic doctor suspected of using unregistered smuggled cellular drugs through a sting operation, from Shenzhen for cancer treatment  and illegally importing blood products and trafficking organs to profit from extortionate fees. The coverage also revealed the death of a local artiste’s wife after receiving the above treatment.

This year’s Gold Award entry “Take a Brace? DIY Orthodontics Unpacked” (話箍就箍？拆解DIY箍牙) explores the hidden risks of self-service dental braces which may lead to tooth loosening or necrosis, and further reminds consumers of the importance of receiving a diagnosis and supervised orthodontic treatment from professional doctors.

The Video Reporting (Short Clip) Gold Award went to “Unregistered Lipolysis Injection Flying Off Shelves Online South Korean Manufacturer: ‘Not for injection’ ” (網上熱賣溶脂針未經註冊南韓生產商：非注射用). Paying a mystery visit to a lipolysis company, the reporter discovered that the company arranged for non-medical staff to perform injections or simply provided instructional videos for consumers to perform the injection by themselves, which may cause accidental damage to the nerves or salivary glands. Besides, the drug solution was not even labelled with the detailed ingredients nor registration number, greatly increased the difficulty of seeking treatment in case the consumer develops allergies after the lipolysis procedure.

Coincidentally, the entry which won both the Grand Award and Gold Award in Video Reporting (Long Clip) Category also covered issues within the medical beauty industry. The entry “News Magazine: Beauty from Injection?” (新聞透視：越打越靚？) explored the online sales of cosmetic injection products. The product, which was purchased by the reporter and passed to a cosmetic surgeon for inspection, was found to contain controlled drugs yet neither the dosage, concentration nor instructions for use were indicated on its packaging. If consumers performed the injection according to the seller’s instructions, the manufacturer might be exempted from legal liability to a certain extent, in a sense transferring the responsibility to the consumer. At the same time, the seller would be in offence of “unlicensed medical practice” as they are not medical professionals. Although the lipolysis injections used in these treatments were approved by the Department of Health (DH), some traders used the injection drug on body parts that were not approved by the DH, or had misleading omissions in their promotional materials, reflecting that the risks of medical beauty should not be overlooked.

The News Photography Gold Award went to “The Hide and Seek of Compulsory Testing” (強檢捉迷藏) after consolidating the respective scores from the adjudication panel and public voting. The winning entry documents the surge in demand for compulsory testing and self-paid testing during the height of the pandemic, when long queues were often sighted across Hong Kong. Taken in a restricted area in Jordan, the photo captured a rooftop scene of medical staff observing residents awaiting quarantine.

After consolidating the scores from the adjudicators and public voting, the award went to “Legal Cannabis?” (合法大麻？), a piece that explored the efficacy and safety of cannabidiol (CBD) products. The team conducted a comprehensive report on the topic covering interviews with different stakeholders, namely CBD product retailers, CBD food store owners, and university lecturers from the Chemistry and Pharmacy faculties etc., as well as lab tests on various CBD products purchased from the marketplace.

Best Use of Social Media in Consumer Advocacy

As social media has become one of the key channels for the public to receive news information, the “Best Use of Social Media in Consumer Advocacy” category was created to encourage social media platforms to promote consumer rights leveraging the Consumer Council’s published content. After combining the scores for audience engagement and that from the adjudicators, the entry “Consumer Council on Cooker｜12 Models Tested and Found that $349 Product Beats $699 Ones in terms of Efficiency; 7 Sin of Misusing Cooker: Don’t Put the Lid On the Stove!＂(消委會電磁爐｜12款檢測 $349效能勝 $699 錯用7宗罪煲蓋忌放爐面！) was awarded the Grand Prize in this category.

A prestigious annual award in the industry, the CRRA is organised by the Consumer Council with the aim to recognise the excellence in reporting issues relating to consumer rights. The adjudication panel comprises 12 notable representatives from various professional organisations and journalism academics, alongside the Vice-Chairman and management members of the Council. (Please see the appendix below for the background details of CRRA and the list of adjudication panel members.)