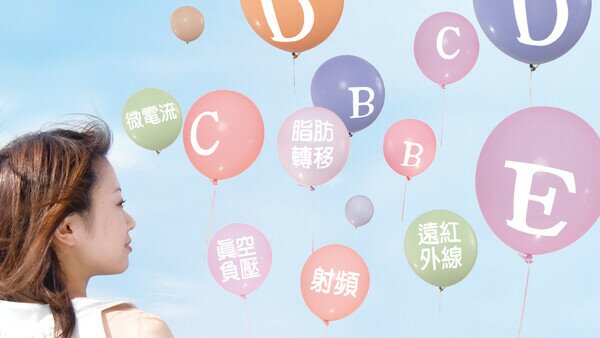 In recent years, many women who are eager to pursue beauty would splash out a lot of money to get slim or increase breast size, hoping to shape up their bodies. Many breast enhancement services attract customers by claiming that neither injection nor medication is required for the treatment with breast cup size greatly enhanced in a short time. Sales tactics such as “Free Trial”, “Super Low Price” and "Today’s Offer" are often adopted. The Consumer Council has conducted a shadow shopper survey on 10 beauty companies that offer non-surgical breast enhancement services and found both the charging criteria and treatment details generally lacking in transparency. When enquired about free trials or discounted priced services as advertised, sales representatives of some companies made various excuses and instead tried to convince consumers to pay extra amounts for treatments claimed to be "more suitable". The amount of money involved could be tens of thousands of dollars. A “free trial” might easily turn into “paying to get away”. Subsequently, consumers would not receive any refund if they considered the treatment not suitable once it has started.

Some treatments featured technology such as “microcurrent”, “radio frequency”, “infrared radiation”, “fat transfer” and “vacuum suction” to achieve breast enhancement beauty effects. However, plastic surgery specialist pointed out that these claims were not substantiated by medical proof. The efficacy and durability of such treatments were also dubious. Improper application of the equipment may even cause burns or scalds. In fact, breast development is determined by the body’s hormonal levels and is basically completed after puberty. There is insufficient medical proof to support that non-surgical treatments could lead to significant breast enhancement. Consumers should not readily believe in the sales promotion tactics by certain beauty companies who claimed to be able to use various devices to “unblock the lymph/mammary glands”, “reconstitute breast cells”, “stimulate collagen proliferation”, “boost”, “enhance” or “tighten” the breast, etc. Some health foods or topical medications also claim to have breast enhancement effects but again most are lacking in medical proof. Some foods or herbal medicines contain oestrogens, and prolonged intake poses health hazards as it might increase the risk of breast cancer or cause infertility.

In the past 3 years, the Council has received a total of 20 complaints on breast enhancement service. In one case, the complainant spent a total of over $1 million on breast enhancement treatment courses and products, only to find that they were barely effective. Another complainant came under sales bombardment when she was half-naked in a treatment session. Also, a complainant found the breast enhancement treatment failing to achieve the claimed "cup size increase" effect and demanded a refund but hit the wall in the process. The Council reminded merchants that adoption of high-pressure sales practices would not only tarnish the reputation of the industry but also undermine consumers’ confidence. It might also constitute a violation of the Trade Descriptions (Unfair Trade Practices) (Amendment) Ordinance. The Council reiterated its call to implement the statutory cooling-off period that has been advocated for years. This will help curb unscrupulous trade practices, improve the service quality of the industry, and enhance consumer protection.

To get an insight on the sales practices used in the industry before a consumer joining a non-surgical breast enhancement treatment programs, the Council conducted a shadow shopper survey in June and July this year. Council staff posing as prospective customers collected information from 10 beauty companies to understand their service contents and charges of relevant treatments. The survey found that most companies lacked transparency both in their charging criteria and treatment contents. When Council staff made enquiries, representatives of some beauty companies were evasive, citing reasons such as information not available or replying later. Beauty companies generally provided treatment contents and quotations verbally or on briefly written promotion leaflets. Representative from one of the companies had written down a price quotation but when Council staff requested that piece of information, the sales representative immediately responded that it was valid only for same-day purchases. Based on the information collected, the quotation of 9 beauty companies ranged from $5,000 to $41,400, with a difference of more than 7 times. The claimed technology, number of treatment sessions and methods also varied among different companies, making it difficult for consumers to make a direct comparison.

The survey found that all 10 beauty companies offered free or trial prices for specific trial treatments to attract new customers and persuaded them to buy more expensive treatment courses while they visited the shops. For instance, when Council staff went to one of the companies to inquire about the free trial offer, the sales representative cited that those treatments were "non-tailored" and only had limited effects and instead proposed another breast enhancement treatment which used devices to unblock the lymphatic system to achieve a better effect with extra charge. Another beauty parlour promoted an enhancement program charging $1,900 for 10 sessions. When Council staff inquired at its shop, sales representatives cited that the advertised treatments might not fit all and might even have counter effects. The Council staff was subsequently persuaded to try a “Must Do” course involving a collagen machine and treatment for unblocking the lymphatic system which amounted to a sum of $31,600, 15 times more expensive than the promoted treatment.

Some beauty companies made special offers to new customers and provided complimentary services in order to persuade consumers to make a hasty purchase decision while assessing their overall affordability. Other staff members would team up in the lobbying once they sensed the consumers’ hesitation or refusal. According to complaint cases lodged, some consumers were bombarded with aggressive lobbying while receiving trial treatments. Being naked and feeling embarrassed, consumers might reluctantly make purchases without second thoughts just to get away from the situation.

In a complaint case received by the Council, the complainant made an appointment to receive a free trial service. While being naked in a room receiving a massage by a beautician, another female sales representative suddenly entered and said the complainant had a serious breast sagging problem and recommended her to try a remedial treatment course priced at $18,000. The complainant indicated that she could not afford it because she was just a university student, but the other party persisted, and a female manager subsequently joined the lobby. The manager questioned the complainant in a tough manner and gave her an option to buy half of the course with a 24-month interest free instalment plan at a monthly payment of $375. The complainant succumbed to the high-pressure sales tactics and handed over her credit card to end the "free” trial treatment.

The need for full and firm breasts stems from the subjective aesthetic perception of some people in society and from advertising strategies in the market. Consumers should not blindly believe salespersons’ one-sided account and claimed experience and ought to analyse calmly whether it is worth splashing money on breast enhancement treatments without guaranteed outcomes. Consumers should consult a qualified doctor and undergo examination if they suspect any breast problem. Before signing up for breast enhancement services, consumers should pay attention to the following points:

- Beware of free or low-cost trials. They may be sales tactics. Consumers may be subjected to high-pressure hard sell while undergoing treatment. Consumers should firmly refuse if they are not interested in the treatments. If they notice something unusual, they should try to leave the premises or seek assistance;

- Never unnecessarily divulge your identity card and credit card information to avoid signing up for treatment without realising it. Think carefully before signing any contract with a beauty company to purchase a treatment program, especially when a large amount of money is involved;

- Carefully read the advertisement and service details; pay attention if there is any term such as money-back guarantee. Even if there are explicit promises to refund if the treatment is ineffective, the definition of “ineffective” and the terms and conditions must be clearly stated. If consumers are determined to purchase the service, make sure there are no discrepancies between the contract terms and the salesperson’s claims. Do not sign the contract or make any payment if there is any doubt;

- Pay attention to the risks of prepayment consumption. If the business closes and winds up, consumers can only register with the liquidator as unsecured creditors, and the chances of getting back the prepayments are minimal.