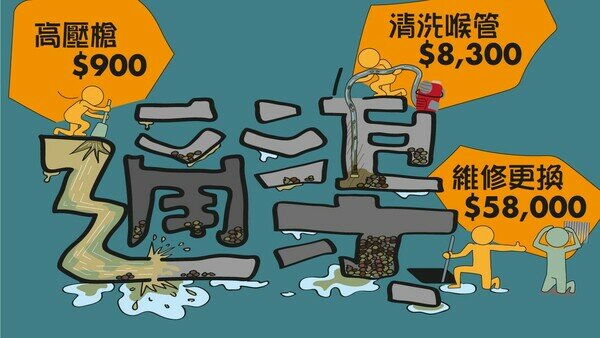 Many consumers search online or use other channels to find drainage clearance services when they come across clogged drain and leakage in the bathroom as urgent action is required to tackle the problem. However, complaints lodged with the Consumer Council reveal that there is no standardized charges with low price transparency in the trade, and some drainage clearance companies even highlight “No charge on Unsuccessful Case” but when the service cannot solve the problem, requests for a refund are invariably refused. Furthermore, the service quality of the drainage clearance workers varies from one to another, causing not only financial loss but also leaving the problem unresolved or even getting worse. Moreover, some online platforms act only as an intermediary providing a matching service, and when disputes arise between the consumer and the contractor, the intermediary can offer no assistance for redress. Consumers should therefore heed to the terms and conditions when deciding whether to engage a drainage clearance service online.

As contractors who provide household drainage clearance services are not required to be licensed, the repair methods they use and the charges are set according to their onsite assessment and personal experience. Consumers have little bargaining power or relevant knowledge to assess if the repair service or charges are reasonable. Once work gets started, they are left practically helpless and at the mercy of whatever repairing works the contractor suggests. Therefore, consumers should choose a drainage clearance contractor with care and pay particular attention to the details of the charges, the techniques employed, the risks and responsibilities involved, as well as post-service cleaning and maintenance details. Consumers should be prudent in deciding when they are skeptical about the techniques employed in the clearance service and the demanded charges.

The complainant’s toilet was severely clogged. By referral from the building management office, she engaged Company A with a proposed charge of $1,500 for both onsite inspection and clearance service. However, when a representative from Company A showed up and made a quick inspection, the complainant was told that the $1,500 charge, which was only for ordinary drainage clearance service, would not be enough to solve the problem and was suggested to dismantle the toilet bowl for further inspection that would cost $3,800 to which the complainant reluctantly agreed.

When the toilet bowl was dismantled, the contractor said the drainpipe was severely rusty, and if it bursts, it could affect the unit below. He produced a photo to show the severity of the drainage overflow and quoted a repairing charge of $38,000 to fix the problem. The contractor also pointed out that since the drainpipe was connected to another toilet in the house, the problem could be solved altogether at the charge of $58,000. The sight of the bathroom filled with sewage left the complainant with no choice but to accede to the contractor’s assessment to fix the problems of the two toilets for $58,000.

The complainant later found out through enquiries with other drainage clearance companies that Company A had grossly overcharged, so she brought her case to the Council to seek redress. She said that after the toilet bowl had been dismantled and seeing the floor covered by sewage, coupled with the continued persuasion by the contractor, she could not stay calm to think of other alternatives.  She sought the Council’s help to get a partial refund. In response, Company A contended that high-pressure water jetting was employed for the job and they had to bear the risk of compensation for the drainpipe burst, so the cost was higher. In rejecting her refund request, the company stressed that the complainant had agreed to the repair. While understanding that seeking refund would not be easy, the complainant asked the Council to pay attention to the business practices of the company in question, and notified her building management office to stop referring the company to other residents.

Company B advertised on its website the service pledge “No Charge on Unsuccessful Case” and the guarantee that if the problem recurred within one week after repair, it would provide free repair service. The complainant found the service suitable and so made an appointment with Company B to fix her slow draining bathtub at home. After inspection by the contractor, she was told that the drainpipe was severely clogged and a charge of $900 was required for using high-pressure water jetting to clear the drainpipe. The job took only 15 minutes. She then turned on the water tap for a test, and after seeing the water drain smoothly, she paid the contractor the agreed service charge.

However, soon after the contractor left, she discovered water leaking from the side of the bathtub. She called the company many times but in vain. She was able to contact a company staff member the next day but was only told that there was no one available to come over right away. As the water leakage caused flooding from the bathroom to the hallway, the complainant had no choice but to engage another contractor. When the new contractor pried the marble slab of the bathtub open, he found the drainpipe had been damaged due to pressure. The complainant was charged $3,000 for the repair. She was dissatisfied with Company B’s refusal to provide repair service as pledged after its improper use of the high-pressure water jet that damaged the drainpipe. She thus approached the Council to seek refund of the $900 repair cost.

Council staff wrote to Company B but received no reply. They called the phone number on the sales receipt and reached two of the company staff but both were unresponsive, claiming that the responsible person would return the call later. However, the call was never returned. The Council deemed Company B to be totally uncooperative, and the complainant was advised to pursue her case through the Small Claims Tribunal. She further consented to refer her case to the Customs and Excise Department for investigation of a possible violation of the Trade Descriptions Ordinance.

The complainant contacted Company C through information he found online to arrange the repair of a clogged drain in his home. After an onsite inspection, the representative from Company C told him that the drainage clog was severe and would require special tools to clear it for which he quoted a price of $8,300. The complainant thought the price was excessive but was assured by the contractor that the problem would be thoroughly resolved. With great reluctance, he acceded to the offer.

However, after a lapse of a month, the same drainage clog recurred. He then called the number listed on the sales receipt but could not get any reply. He then tried the hotline listed on the Company C’s website but was told that the receipt was not issued by the company, so they could not offer any help. The complainant suspected that Company C’s website was just a platform to provide a matching service between consumers and contractors, so that both Company C and the contractor concerned could shift the blame and responsibility to each other. He also found many similar cases on the internet and suspected that the companies regularly changed their “Pre-paid Sim Card” to cut off contacts with former consumers. The complainant then turned to the Council for help.

The Council spoke on the phone with a staff member of Company C and when asked how the company would deal with a drainage clearance company if the customer had the same problem after just a month, the staff member could not give an answer and hung up hastily. The Council repeatedly contacted Company C and the company that had issued the receipt but both were uncooperative. The Council also wrote to the address on the receipt but the mail was returned. The complainant was duly informed and subsequently requested the Council to use the case to alert consumers.

- Consumers should get prepared by enquiring about drainage clearance service companies in their neighborhood in case they need the services. They should obtain more information on the internet, seek referrals from other users, and ask for their evaluation of the contractors they have used;

- Consumers should pay attention if the website platform they are dealing with is only an intermediary providing a matching service between service contractors and prospective customers. If so, check the background of the contractors and the company they work for, and equally important, the information on the sales receipts;

- When the drainage clearance company or the contractor proposed additional services, such as dismantling the toilet bowl for inspection, consumers should enquire about the details of the inspection, the method of repair and the total estimated cost of the repair;

- Drainage service companies generally provide hand-written receipts only, so consumers should ask for a comprehensive list detailing various items of works that had been performed. If the service charge also covers post-service maintenance, consumers should request the company to specify the maintenance period and the terms of service on the receipt which should be retained as documentary proof in case of need for future redress.