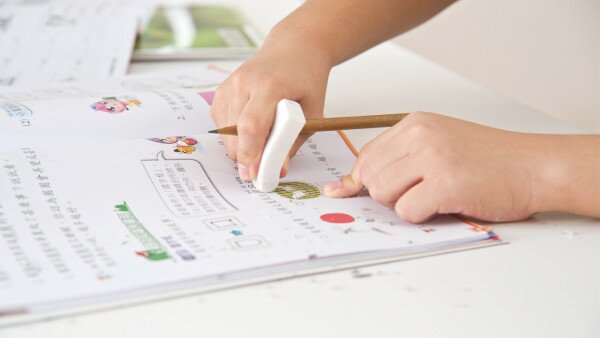 Eraser is essential for children's studies and they are in constant contact with this stationery item.  Some erasers, decorated with adorable patterns or in unique shapes, and scented with flavours, are highly sought-after among school children.  However, the Consumer Council's test found that most of the tested erasers contain phthalate plasticisers and the total amount in over 50% of tested models are higher than the upper limit of the Taiwan standard by 0.1% with the worst sample reaching 60.9% in total.

Consumers should note that when in normal usage of erasers, it is unlikely to pose immediate health impact.  However, if children have the habit of licking, sucking and chewing their erasers, parents should stop them at once.

In recent years, there is a global concern over the phthalates in erasers. Taiwan’s Bureau of Standards, Metrology & Inspection believed phthalates may disturb the balance and functions of endocrine system of children, increase the risks of feminisation of males and breast cancer for females.  Though an overseas study report suggested that exposure to a single phthalate from a single product may not constitute a health risk to children as young as 6 years old.  However, exposure to various types of phthalates from multiple sources may lead to health concern.

The Council sampled 25 eraser models available in the market and tested 8 types of phthalate plasticisers (namely DMP, DEP, DEHP, DBP, BBP, DINP, DIDP and DNOP) with reference to the Taiwan standard CNS 15138 which stipulates that the content of individual phthalate should not exceed 0.1% (by weight), and the total content should not be over 0.1%.

Besides, among the 25 models tested: 15 were in white, 6 in black, the remaining 4 in blue, light brown, orange and pink respectively.  The total amount of phthalates of the 6 models in black complied with the Taiwan standard.  However, this is insufficient to establish the correlation between colour of eraser and the amount of phthalates contained.

Most erasers tested are made of polyvinyl chloride (PVC) phthalates which are commonly added to make them softer and flexible, so that gentle rubbing on a paper can achieve a satisfactory erasing effect.  Since PVC products containing phthalate plasticizers have been widely used, the Council has found a large amount of phthalates in toys and children’s shoes in our previous tests, indicating that children could be in contact with phthalates through multiple channels.

To safeguard consumers, the Council believes introducing a restriction of the amount of phthalates for all consumer products to minimise consumers’ contact with phthalates through multiple channels.

The Council suggests consumers, when choosing and using erasers, to pay attention to the following: