60 Pre-packaged Biscuits All Detected with Genotoxic Carcinogens 85% Found to be High in Fat, Sugar or Sodium Labelled Claims of 40% Samples Inconsistent with Test Results Calling for Prompt Rectification 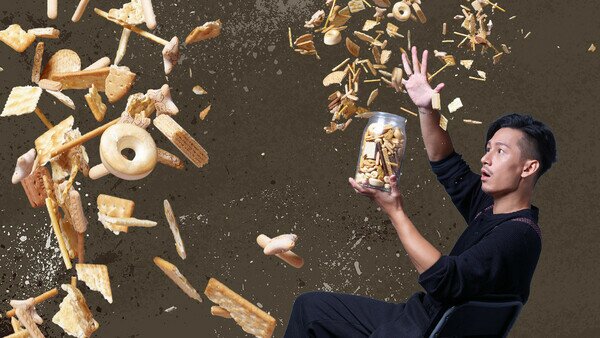 As one of the most versatile snacks, biscuits are popular with adults and kids alike, sometimes even serving as an easy substitute to regular meals for some busy office workers and the elderly. However, the Consumer Council tested 60 samples of pre-packaged biscuits on the market and found all samples contained the genotoxic carcinogens glycidol and/or acrylamide which are contaminants produced during processing. Amongst this, over 75% (46 samples) were simultaneously detected with 3 types of contaminants (glycidol, 3-MCPD and acrylamide). Besides, 85% (51 samples) were classified as “high-fat”, “high-sugar” or “high-sodium” foods. The Council reminds consumers to pay heed to the health risks of consuming various types of biscuits, and at the same time urges manufacturers to improve the formula so as to reduce the level of contaminants, fat, sugar and sodium in the food.

Of the 57 test samples that included nutrition labelling, 23 were found to have discrepancies between their actual nutrient contents and the value declared that exceeded the acceptable tolerance range (20%), the results of which have been referred to the Centre for Food Safety (CFS) for follow-up action. The most severe case was a sample of crackers detected with a saturated fatty acid (SFA) content that exceeded the labelled amount by 76 times. The Council stresses that accurate nutrition labelling is important information for consumers. As inaccurate information has particularly severe health impacts to individuals with long-term illnesses, such as diabetes and heart diseases, manufacturers should pay heed to the accuracy of labelling information and promptly rectify errors to safeguard the health of consumers.

Over 75% Samples Contained 3 Types of Contaminants

The safety test items included detecting the presence of the contaminants glycidol, acrylamide, and 3-MCPD. As glycidol and acrylamide are both genotoxic carcinogens which may induce cancer in experimental animals, the Joint Food and Agriculture Organization/World Health Organization (WHO) Expert Committee on Food Additives (JECFA) opines that it is inappropriate to establish a health-based guidance value on intake limits for genotoxic carcinogens, and suggests that the intake of genotoxic carcinogens should be as low as reasonably practicable/achievable (ALARPA).

Formed during the high-temperature (over 200°C) deodorisation process of oils and fats, glycidyl esters (GE) can be substantially hydrolysed to glycidol and released in the gastrointestinal tract. The test revealed that 54 samples contained glycidol ranging from 11μg/kg to over 3,900μg/kg. As the sample (a soda biscuit sample) with the highest detected glycidol level exceeded the detection limit of the German test method (over 3,900μg/kg), the Council engaged a third part laboratory to further confirm the test results using an alternative test method, and the sample was found to contain 3,100μg/kg of glycidol.

Ingredients containing asparagine (ASN) (a type of amino acid), such as potatoes and cereals, are likely to produce acrylamide when processed at high temperatures. According to the test results, 55 samples were detected with acrylamide with levels ranging from 32μg/kg to 620μg/kg, amongst which 4 samples exceeded the benchmark level (350μg/kg) for general biscuits and wafers laid out by the European Union (EU), while 3 cracker samples exceeded the benchmark level (400μg/kg) for crackers set by the EU.

Apart from the “Trade Guidelines on Reduction in Acrylamide Level” for the local industry, the Council anticipates the authorities to impose benchmark levels for foods with a higher risk of containing excessive levels of acrylamide, such as French fries, crisps, biscuits and crackers, with reference to the EU, so that the industry can lower acrylamide level in food based on these reference levels. Besides, 6 samples were not detected with glycidol and 5 samples were not found with acrylamide, proving that there are ways to lower the level of such contaminants in the production process. The Council urges manufacturers to evaluate their formulas and raw materials and improve the situation promptly.

3-MCPD was detected in 56 test samples with a huge disparity in the levels, ranging from 15μg/kg to 2,000μg/kg. The European Food Safety Authority recommends a Tolerable Daily Intake (TDI) for 3-MCPD of no more than 120µg for a 60kg adult. Taking the biscuit sample with the highest 3-MCPD level (2,000μg/kg) as an example, the labelled serving size was 25g (1 packet with 3 pieces). If 8 pieces (66.7g) were consumed, the 3-MCPD intake would exceed the recommended TDI (120µg). On the other hand, as the 3-MCPD TDI for a 5-year-old boy (reference weight of 19.5kg) should be no more than 39μg, the 3-MCPD intake for consuming 1 serving of the sample (1 packet with 3 pieces) would already exceed the TDI (39μg) of the child. Consumers are reminded to select products carefully and refrain from excessive consumption to avoid ingesting foods with a higher level of contaminants.

85% Samples were High in Fat, Sugar or Sodium

The total fat content of the 60 samples ranged from 4.9g to 41.3g per 100g sample, amongst which 33 samples reached the “high-fat” food benchmark (i.e. over 20g total fat content per 100g solid food sample) laid out in the Centre for Food Safety’s guidelines. The SFA content of the samples vasty varied, with almost 19-time variance between the highest (23.7g, a wafer sample) and the lowest (1.2g, a cracker sample). Based on the 2,000kcal diet of an adult, consumption of a serving of the sample with the highest SFA content (23.7g) would incur a SFA intake of 5.7g, accounting for around 29% of WHO’s recommended daily intake (20g).

Trans fatty acids (TFA) could affect the levels of “good” and “bad” cholesterols, consequently increasing the risk of coronary heart disease. 46 test samples were found to contain TFA, the highest being a sample of wafer which contained 1.36g TFA per 100g. Upon consuming 12 pieces (around 86.4g) of this sample, the TFA intake would exceed half of the daily limit (2.2g) recommended by WHO.

In July this year, the “Harmful Substances in Food (Amendment) Regulation 2021” was passed in Hong Kong, in which “partially hydrogenated oil” (PHO) (i.e. the main source of industrially-produced trans fatty acids) is specified as a prohibited substance in food. It also prohibits the import of any edible oil or fat, and the sales of any foods containing PHO. The “Food and Drugs (Composition and Labelling) (Amendment) Regulation 2021” was passed at the same time and stipulates that any pre-packaged food containing hydrogenated oils (e.g. fully hydrogenated oil) must be indicated accordingly in the list of ingredients. The amendment regulations will come into force on 1 December 2023. Review of the ingredient lists on the samples revealed that many lacked specific indications on whether the oil ingredients were hydrogenated. The Council expects the industry to proactively improve the food labels promptly, in an effort to fortify consumers’ right to be informed.

Furthermore, 27 samples reached the benchmark for “high-sugar” foods (i.e. containing more than 15g of sugars per 100g solid food sample), amongst which a wafer sample with the highest sugar content contained 42g of sugars per 100g. Consuming 1 serving (30g, half a box) would incur a sugar intake of 12.6g, equivalent to around 25% of the daily intake limit (50g sugar based on a 2,000kcal daily diet) for adults recommended by WHO.

As for sodium content, 13 samples were classified as “high-sodium” foods (i.e. containing more than 600mg of sodium per 100g solid food sample), of which a cracker sample with the highest sodium content contained 1,090mg sodium per 100g. If 7 pieces (105g) of this sample is consumed, the sodium intake would account for over 50% of WHO’s recommended daily limit for adults (2,000mg sodium).

Besides, a respective 3 and 18 samples met the requirements for “high fibre” and “source of fibre” (i.e. containing not less than 6g and 3g of dietary fibre per 100g solid food sample respectively) as defined by the “Food and Drugs (Composition and Labelling) Regulations”. However, consumers should be mindful that even for the cracker sample with the highest fibre content (10.3g per 100g), one must consume 11 pieces in order to meet half of the recommended daily intake (not less than 25g) for adults, but it would also result in a considerable sugar, sodium and fat intake. As such, consumers should not rely on products labelled as “high fibre” as the main source of dietary fibre intake.

40% Samples Not in Compliance with Nutrition Labelling

3 of the test samples were granted exemption from nutrition labelling. For the remaining 57 samples, their actual nutrient content from the test results was compared with the value declared on their nutrition labels. It was found that 23 samples had discrepancies that exceeded the stipulated tolerance limit. Out of which the total fat content for 5 samples, SFA content for 8 samples, TFA content for 1 sample, sodium content for 7 samples, sugar content for 5 samples, and dietary fibre content for 2 samples were found with discrepancies of over 20%, which was not compliant with the tolerance limit set in the Centre for Food Safety’s “Technical Guidance Notes on Nutrition Labelling and Nutrition Claims”. The most severe discrepancy was the SFA content for a cracker sample, which had a 76-time variance between its labelled value of 0.08g per 100g and the actual content of 6.13g from the test results.

The test results also revealed that 4 samples did not comply with the condition claimed as “0” on the nutrition labelling. Based on per 100g, a cracker sample was detected with 1.2g SFA and 1.1g sugar content; a wafer sample was found with 1.36g TFA; 1 soda biscuit and 1 sample of other types of biscuits were found to contain 0.8g and 3.9g sugars respectively. In addition, 3 samples did not declare the TFA content on their nutrition labels. The situation overall is worrying.

Apart from the nutrient contents, the safety test revealed that 8 samples contained preservatives or antioxidants. Although the detected amount did not exceed the range stipulated in regulations, 5 samples did not declare such ingredients in their labels. Pre-packaged foods should declare additives. Even if such preservatives or antioxidants might have originated from the ingredients, manufacturers could still pay heed to the ingredient list when sourcing raw materials, then provide supplementary information in the product label stating that the ingredients contained additives to being with.

The test results reflected that much improvement is needed from the industry for various aspects, from ingredient selection, production formula, manufacturing process, to quality control. When selecting snacks and refreshments, consumers could consider healthier alternatives, such as fresh fruits, dried fruits without added sugar, multigrain bread, cherry tomatoes, unsalted roasted nuts and seeds, low-sugar soy milk, and low-fat or skimmed milk, while bearing in mind biscuits should not be a substitute for regular meals. When purchasing biscuit-type foods, consumers should carefully scrutinise the product’s nutrition labelling, serving size and expiry date; avoid risks of long-term intake of excessive amounts of contaminants, sugars, sodium and fats in order to stay healthy.